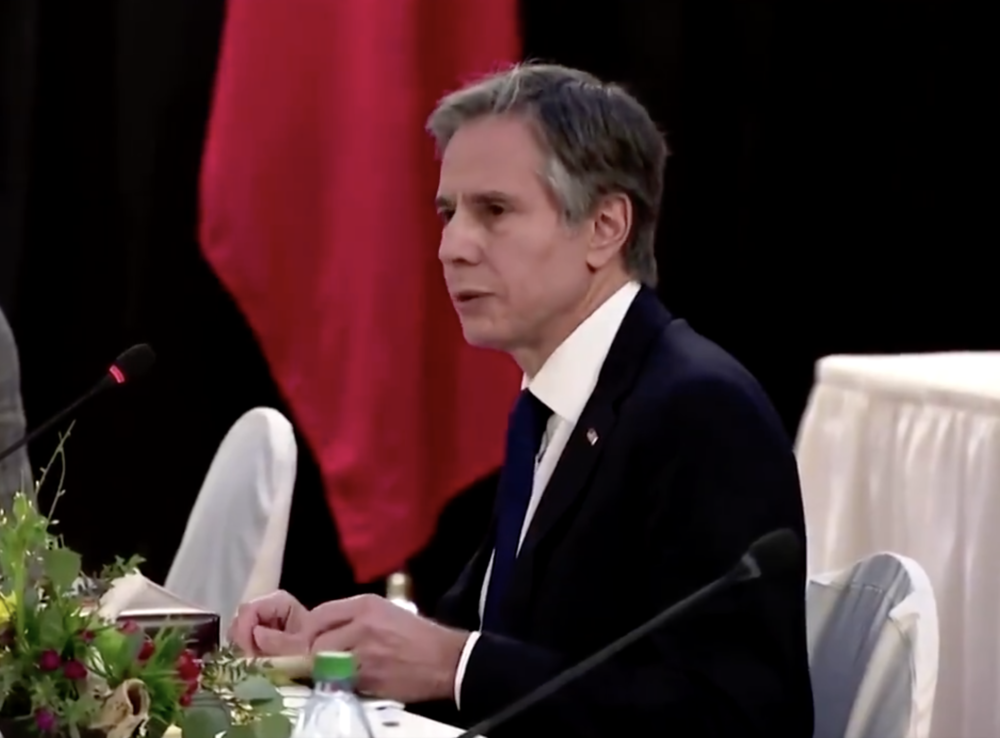 What started as Blinken warning China that the United States would not shy away from addressing issues such as in “Xinjiang, Hong Kong, Taiwan, cyber attacks on the United States, economic coercion of our allies,” hinting at America’s recent sanctions on Beijing, however, turned into a tense “spat” that left some Chinese Communist Party propaganda and agenda-setting unchecked.
While it was previously agreed that each side of the exchange would be allowed to speak for two minutes in the introduction of the session, one of the Chinese diplomats ignored the parameters and monologued for more than 15 minutes, invoking propaganda about why the United States should stay out of China’s business, especially concerning human rights.
“China is firmly opposed to U.S. interference in China’s internal affairs. We have expressed our staunch opposition to such interference, and we will take firm actions in response of human rights,” the diplomat stated. “We hope that the United States will do better on human rights,” he said, pointing to the Black Lives Matter movement in America. “China has made steady progress in human rights.”
The diplomat also claimed that “the United States has United States-style democracy and China has Chinese-style democracy,” a talking point used by Biden in February, and that internal advancements in terms of democracy should be left up to Chinese people.
“Let me say here that in front of the Chinese side, the United States does not have the qualification to say that it wants to speak to China from a position of strength,” the diplomat concluded.
Watch until the end. Utterly brutal. Completely outclassed.
This is bad, folks.pic.twitter.com/0lW4YYXwqB
U.S. officials rushed to label the claims made by China as “grandstanding focused on public theatrics and dramatics over substance” meant to rile up support back in the mainland, a tactic that reportedly worked.
“Many netizens on China’s social media said Chinese officials were doing a good job in Alaska, and that the U.S. side lacked sincerity,” Reuters noted. “Some even characterized the talks as a ‘Hongmen Banquet,’ referring to an event that took place 2,000 years ago where a rebel leader invited another to a feast with the intention of murdering him.”
Blinken and Sullivan concluded the public portion of the meeting by hinting at a “more clear-eyed relationship” between the United States and China and a “stiff competition.”
“Our intent is to be direct about our concerns, direct about our priorities, with the goal of a more clear-eyed relationship between our countries moving forward,” Blinken said.
“We do not seek conflict but we welcome stiff competition, and we will always stand up for our principles for our people, and for our friends,” Sullivan continued.
Jordan Davidson is a staff writer at The Federalist. She graduated from Baylor University where she majored in political science and minored in journalism.
Antony Blinken CCP China Communist China Jake Sullivan