Nick Fuentes BANNED From Clubhouse During His First Broadcast 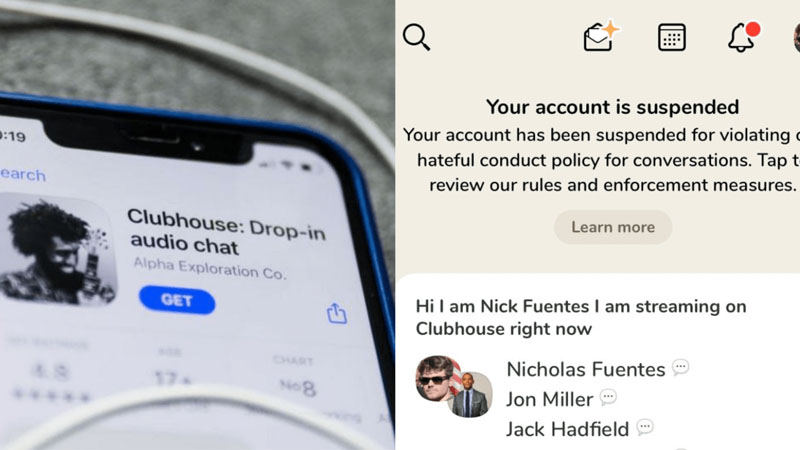 America First commentator Nick Fuentes has been banned from the live audio-chat app Clubhouse for violating their “hateful conduct” policy during his first broadcast.
Fuentes broadcast his first stream on Clubhouse on Saturday night. The room, which featured a small number of guests including conservative commentator Jon Miller and this reporter, casually and light-heartedly discussed topics ranging from current cultural divides among conservatives and who should feature in the “big tent” of the conservative movement, immigration and America, and free speech and cancel culture.
However, around three hours after beginning the broadcast, Fuentes was banned from the app mid-conversation. In a post on Twitter, the America First commentator revealed that his account had been suspended by the app for violating their “hateful conduct policy” for conversations. “Clubhouse is just another anti-free speech Big Tech platform,” Fuentes said, speaking exclusively to National File. “Don’t waste your time on it!”

Lmao pic.twitter.com/gvB9OJ08LC
— Nicholas J. Fuentes (@NickJFuentes) March 7, 2021
I lasted three hours on Clubhouse before I got suspended for “hate speech.” Cool app @joinClubhouse
— Nicholas J. Fuentes (@NickJFuentes) March 7, 2021
Andrew Torba, the CEO of free-speech social network Gab, had warned about the potential censorship from Clubhouse earlier this week. “Clubhouse is Silicon Valley owned, funded, and controlled,” Torba said. “If the right thinks they have any future on that platform they are kidding themselves,” noting that the app developers are discussing ways to use AI to moderate conversations. Torba also highlighted that they are funded by a16z, an investment fund that also funds Big Tech companies like Facebook and Instagram. He added that Gab will be releasing their own version of the app later this year.
Clubhouse is funded by @a16z the same people who funded: Facebook, Instagram, Pinterest, and more. They are already discussing ways to record convos and use AI to detect “hate speech” in rooms. Imagine using this app and tying your personal info to it. Not smart! https://t.co/a2sFp5VgvG
— Gab.com (@getongab) March 5, 2021
It is unclear exactly why or how Fuentes was banned. It’s possible that Fuentes was directly reported to the app by somebody listening into the conversation using the native report feature. Another possibility is that the app decided to ban Fuentes based off of reporting by leftist political journalists, who were live-tweeting the conversation. Clubhouse had been pinned by some as the potential next app for the “far-right” to engage with, potentially causing a quick backlash against Fuentes by the app. National File has reached out to Clubhouse for comment and will update this story if there is a response.

President Trump joins Newsmax TV’s Greg Kelly to discuss his war of words with Mitch McConnell, Joe Biden’s recent statements, Hillary Clinton being the ‘angriest person in the country,’ his thoughts on the Andrew Cuomo scandal, and more.