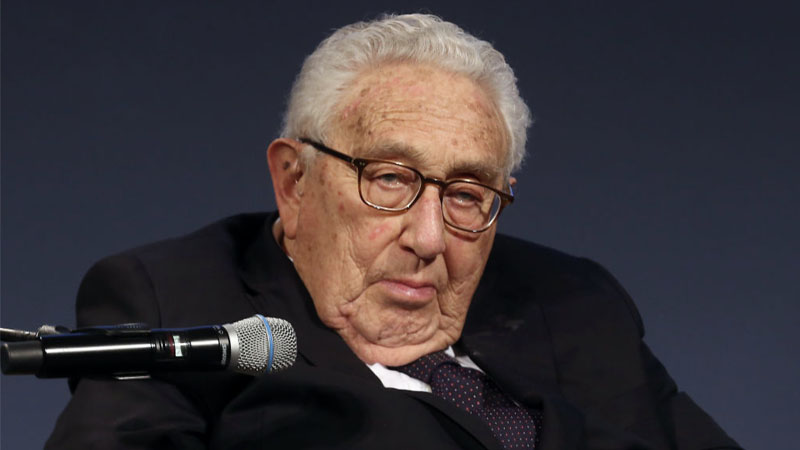 Former secretary of state Mike Pompeo, former national security adviser Robert O’Brien, Rep. Mike Gallagher (R-Wis.), and former deputy national security adviser Matt Pottinger also participated in the seminar.
Kissinger likened Donald Trump’s diplomatic achievements in the Middle East to Nixon’s opening of China in 1972, and warned that the Biden administration should continue the tough Trump policy on Iran.
He also called the Trump administration’s Abraham Accords a breakthrough in Arab-Israeli relations.
“I think that one of the great successes of the previous administration was that they had lined up, that they had achieved two things in the Middle East,” Kissinger said.
“One, to separate the Palestinian problem from all of the other problems so that it did not become a veto over everything else.He added:
“Secondly, of lining up the Sunni states in actual or potential combination against the Shiite states, which is Iran, that was developing a capacity to threaten them. I think that this was a brilliant concept. We were just at the beginning of it.”The Abraham Accords, brokered by former President Donald Trump, established new cooperation and normalization between the United States, Israel, and Arab countries such as the United Arab Emirates (UAE), Sudan, and Morocco.
(L-R) Bahrain Foreign Minister Abdullatif al-Zayani, Israeli Prime Minister Benjamin Netanyahu, U.S. President Donald Trump, and UAE Foreign Minister Abdullah bin Zayed Al-Nahyan hold up documents after participating in the signing of the Abraham Accords where the countries of Bahrain and the United Arab Emirates recognize Israel, at the White House in Washington on Sept. 15, 2020. (Saul Loeb/AFP via Getty Images)
It also opened up economic, social, and cultural ties between the Arab world and the Jewish state and strengthened the Gulf states’ and Israel’s defenses against Iran, earning the former president Nobel Peace Prize nominations.
“This was a brilliant concept. We were just at the beginning of it. It was like the beginning of the China opening. The evolution of it was just beginning,” Kissinger said.Kissinger urged the Biden administration to uphold the current policy in the Middle East cemented by Trump.
“We should not give up the pressures that exist on Iran until we know where they are heading,” Kissinger said.
“If we break out the Iranian issue from the overall Middle Eastern issue, we run the risk of losing the two achievements, namely of separating the Palestinian issue, which removes it as a veto over everything else, and the Sunni cooperation with Israel, which is unique in its openness.”Elsewhere during Wednesday’s seminar, Former secretary of state Mike Pompeo likened Trump’s “unique” approach to international affairs and foreign policy to President Nixon’s.
Former Secretary of State Mike Pompeo addresses the Conservative Political Action Conference held in the Hyatt Regency in Orlando, Fla., on Feb. 27, 2021. (Joe Raedle/Getty Images)
“This was a president that came at foreign policy problems in a unique way,” he said of Trump.
“I wanted to make sure the senior people, at least I brought around to the team, understood the environment which we were going to be working in and how we were going to effectively deliver operationally President Trump’s foreign policy. So, I wanted to make sure—while we know Washington is occupied by a lot of folks and a lot of big egos—there were people who were prepared to make sure they were working as part of the team that President Trump wanted to deliver on foreign policy he had put forward to the American people.”The United States on Feb. 25 launched airstrikes against militants in eastern Syria, targeting sites connected to Shia militias groups backed by the Iranian regime believed to be involved in recent attacks against U.S. targets in Iraq.
Biden has also announced that the United States is rejoining or moving to rejoin the pact with Iran, the Paris climate accords, and the United Nations’ Human Rights Council, among other international agreements or entities.