Trump: We Cannot Just Lock Ourselves in Our Basement During Coronavirus Like Joe Biden 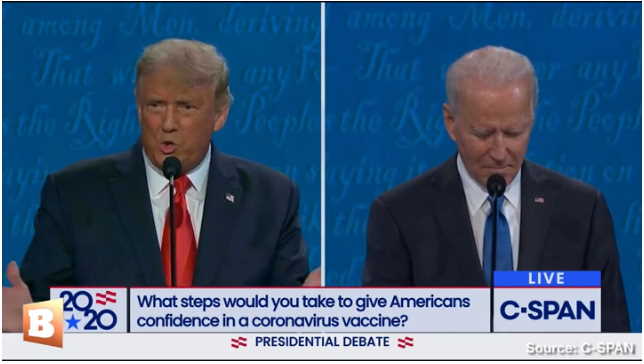 President Donald Trump on Thursday at the final 2020 presidential debate said that the United States would have to learn to live safely with the coronavirus rather than lock down the country to prevent the spread.

“We’re learning to live with it; we have no choice. We cannot lock ourselves up in a basement like Joe does,” Trump said. “He has the ability to lock himself up. I don’t know, he’s obviously made a lot of money someplace.”

“He has this thing about living in a basement. People can’t do that,” Trump said about Biden.

President Trump said that he could not lock himself up in a basement either, or even in the White House. He said that he continued events, meeting military families, and hosting events as the leader of the United States even though it is dangerous.

“This is dangerous, and you catch it, and I caught it. I learned a lot — great doctors, great hospitals — and now I recovered,” he said.

The president noted that 99.9 percent of young Americans who contract the virus recover, and 99 percent of all Americans recover.

“We have to open our school and we cannot close our nation or we will not have a nation,” he said.