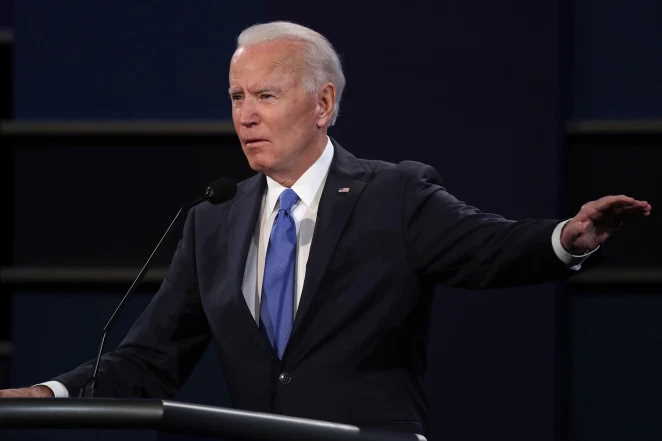 President Trump slammed Joe Biden for calling him “xenophobic” in the early days of the coronavirus outbreak during their debate on Thursday night.

But the two sparred over why Biden had lobbed the insult.

The president said Biden had called him xenophobic over the restrictions on travel from China that he had imposed on Jan 31.

“When I closed and banned China from coming in… months later he was saying I was xenophobic, that I did it too soon,” Trump said, “and now he’s saying I should have moved quicker.”

In response, Biden said: “He is xenophobic, but not because he shut down travel to China.”

The word xenophobia means the ‘fear and hatred of strangers or foreigners or of anything that is strange or foreign,’ according to the Merriam-Webster Dictionary.

Biden did in fact call the president “xenophobic” in a tweet sent on Feb. 1 — the day after the ban — though he did not specifically note the travel restrictions.

“We are in the midst of a crisis with the coronavirus. We need to lead the way with science — not Donald Trump’s record of hysteria, xenophobia, and fear-mongering,” Biden tweeted.

“He is the worst possible person to lead our country through a global health emergency.”

Then at a press conference in March, Biden used “xenophobic” in reaction to Trump labeling COVID-19 as the “China virus.”

That same month, Biden also tweeted that “Banning all travel from Europe — or any other part of the world — will not stop” the coronavirus.

The former veep’s campaign waited until April 3 to finally say that it “supports travel bans that are guided by medical experts, advocated by public health officials, and backed by a full strategy.”

“Science supported this ban, therefore he did too,” Biden’s deputy campaign manager Kate Bedingfield told CNN at the time.

She also told the outlet that Biden’s “reference to xenophobia was about Trump’s long record of scapegoating others at a time when the virus was emerging from China,” and not the travel ban.