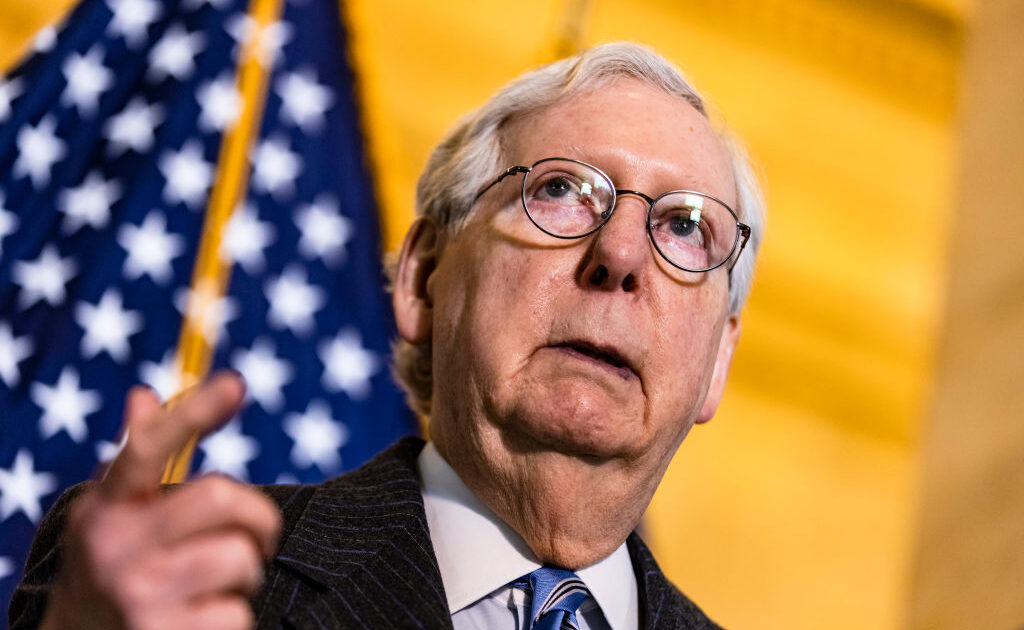 UPDATED 4:47 PM PT – Saturday, March 20, 2021
The Senate’s top Republican outlined the potential ramifications if Democrats scrap the filibuster. Left-wing lawmakers have frothed at the opportunity to eradicate the procedure in order to impose a far-left agenda on America.
On Tuesday, Senate Minority Leader Mitch McConnell (R-Ky.) spoke on the Senate floor and said nobody serving in the chamber could even begin to imagine what a “completely scorched Earth Senate would look like.” He pointed out how the Senate operates by unanimous consent on a day-to-day basis and indicated he would seek to slow down Democrats by utilizing the rules of the chamber.
MCCONNELL threatening to grind Senate to halt if Dems eliminate the filibuster: “The Senate would be like a hundred-car pile up, nothing moving.”
— Lindsay Wise (@lindsaywise) March 16, 2021“So this is not a trade-off between trampling etiquette, but then getting to quickly transform the country,” McConnell noted. “That’s a false choice. Even the most basic aspects of our colleagues’ agenda, the most mundane task of the Biden presidency, would actually be harder — not easier — for Democrats in a post-nuclear Senate that is 50-50. Dead even. If the Democrats break the rules to kill Rule 22 on a 50-50 basis, then we will use every other rule to make tens of millions of Americans’ voices heard.”
McConnell also warned Democrats if they scrapped the procedure, Republicans would pass conservative policies with “zero input” from the left if they were to take back the chamber in 2022. The Kentucky senator vowed to take action on several issues including abortion, illegal immigration and gun rights.
McConnell noted the Senate is evenly split and despite what leftist activists want, the American people did not give them a mandate to radically transform the nation. He then reminded his Democrat colleagues that Republicans did not scrap the filibuster when they were in the majority.
The Republican lawmaker stressed how eradicating the filibuster in order to advance a partisan liberal agenda would destroy the fabric of the chamber and go against the duties the American people have entrusted senators to keep and uphold.
“I said to the president at that time: No,” McConnell stated of removing the filibuster. “I said no repeatedly because becoming a U.S. senator comes with higher duties than steamrolling any obstacle to short-term power. I meant it. Republicans meant it. Less than two months ago, two of our [Democrat] colleagues said they meant it, too. If they keep their word, we have a bipartisan majority that can put principle first and keep the Senate.”
Meanwhile, some Democrats in the upper chamber have considered a way to alter the procedure, hoping it would prevent Republicans from stalling long enough to stop a vote on measures like H.R.1.
Moderate Senate Democrats Joe Manchin (W.Va.) and Krysten Sinema (Ariz.) have both pledged to protect the filibuster. In early March, Manchin suggested it could be reformed instead.
“The Senate is the most unique body of government in the world,” Manchin said. “It’s basically designed…to make sure the minority has input. I’m not willing to take away the involvement of the minority. I’ve been in the minority [and] I’ve been in the majority. And I can tell you the respect I have on both sides when I’ve been there should be: “I’ve got something to say. Listen to me,’ and I want that to happen.”
In the meantime, the White House does not appear to be on board with completely eradicating the filibuster either. In a recent interview, White House Chief of Staff Ron Klain said Joe Biden thinks the filibuster should remain and is an important part of the Senate rules. Klain also said Biden hopes the Senate will change the bill instead of killing the long-standing procedure outright.
Me: “The choice facing the Biden administration is: do you support the filibuster or do you support The For The People Act?”@WHCOS: “We support HR1 but the Senate needs to do some work…”
My robust exchange with Ron Klain on Biden’s filibuster support:pic.twitter.com/sLsxEcnJ2D
— Mehdi Hasan (@mehdirhasan) March 15, 2021Despite the administration’s stance, Biden will likely continue to face pressure from the far-left to back their efforts, regardless of the damage it could do to the Senate as an institution and nation as a whole.
RELATED: Fla. Sen. Rick Scott Blasts Dems Over Push To Abolish Filibuster
TOPICS:50-50 SenateBiden AdministrationbipartisanshipDemocrat agendaFar-left agendaFILIBUSTERH.R. 1Joe ManchinKrysten SinemaMcConnellpartisan liberal agendasenateSenate MajoritySenate MinorityWhite HouseWoke agenda