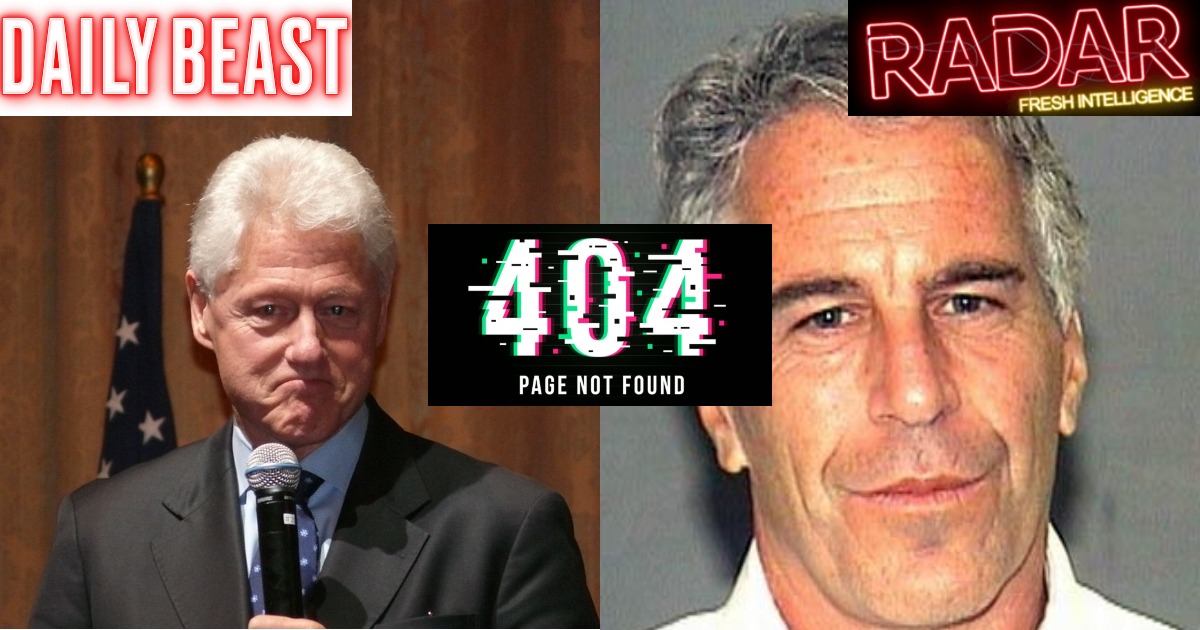 Daily Beast and Radar Online posted then soon deleted a story claiming that longtime Bill Clinton affiliate Doug Band spoke with prosecutors for the Southern District of New York about Jeffrey Epstein’s “Pedophile Island.” National File reached out to the organizations for an explanation, but received no response.
Daily Beast and Radar Online wrote stories that claimed that Doug Band had provided evidence that could implicate his old boss, former President Bill Clinton, in the probe against international sex traffickers Jeffrey Epstein and Ghislaine Maxwell. Immediately after the stories were published, they were quickly removed from both websites with no explanation.
Earlier that day, Radar Online’s Chris Spargo also claimed that Ghislaine Maxwell revealed that she dated Doug Band in her 2016 deposition, as seen in this tweet:
Ghislaine Maxwell reveals that she dated Bill Clinton’s right-hand man Doug Band in her 2016 deposition.
She described it as an “adult consensual relationship,” which is a rarity in this case. pic.twitter.com/J8t0QwpP4f
— Chris Spargo (@chrisonchris) March 5, 2021
When the articles were published, internet users were quick to comment on the new developments.
This Doug Band story is legit. He was Clinton’s right-hand man for 2 decades. Flipped and is talking to the feds about Maxwell and Epstein.
Find Out More >
— Jack Posobiec (@JackPosobiec) March 5, 2021
He’s about to have an “accident”.
— Short Round (@gld_eagle) March 5, 2021
There aren’t enough secret service men in the world who could keep this guy alive.
— Dr. Farmer (@senefarmer) March 5, 2021
Very shortly after the stories were published, they were quickly deleted from the websites. However, National File was able to retrieve this portion of the Daily Beast article from Google’s cache:
“Bill Clinton’s former body man and aide has cooperated with the federal investigation into the former president’s ties to Jeffrey Epstein and Ghislaine Maxwell, Radar Online reports. Doug Band, normally reticent to speak about his former boss, spoke with prosecutors for the Southern District of New York around December 2020 about the millionaire sex trafficker and his alleged madam, according to the site. Band made frequent appearances on Epstein’s flight manifests in the early 2000s, at one point traveling with his alleged girlfriend Naomi Campbell to the financier’s private island Little St. James, known locally as “pedophile island.” He also accompanied Epstein and Clinton on lengthy trips through Africa and Asia. Band has claimed he urged the Clintons to cut ties with Epstein and Maxwell for years, but photos as recently as 2007 show him partying with the pair. Virginia Roberts Giuffre, one of Epstein’s many victims, named Band in a 2016 court filing as one of 70 people who would have knowledge of Epstein’s and Maxwell’s alleged sex trafficking.”
Additionally, users on Reddit posted what appears to be the full Radar Online story, as pointed out by the anti-human trafficking Twitter account known as “An Open Secret.”
The articles were removed the article in the early afternoon of March 5. Less than an hour after the deletions, National File reached out to Daily Beast and Radar Online for clarification and explanation, but has not received any response. National File specifically asked if the respective outlets intended to notify readers of a retraction.
The sudden removal has raised questions concerning the dissemination of false information, or perhaps a real-time coverup of information pertaining to one of the greatest criminal scandals in the history of the United States. According to Daily Beast policy, story deletions “will occur only in very rare circumstances having to do with a serious and fundamental factual error, significant violation of our values or concern about compromising personal safety.”
Tags: Cover UpDaily BeastFake newsGhislaine MaxwellHuman TraffickingJeffrey EpsteinoccultPedophilePedophile islandRadar OnlineRapeSt. JamesShare to Gab