VIDEO: Antifa Sets Fire To Federal Courthouse, Not Considered Terrorism By AG Garland Because It Happened At Night 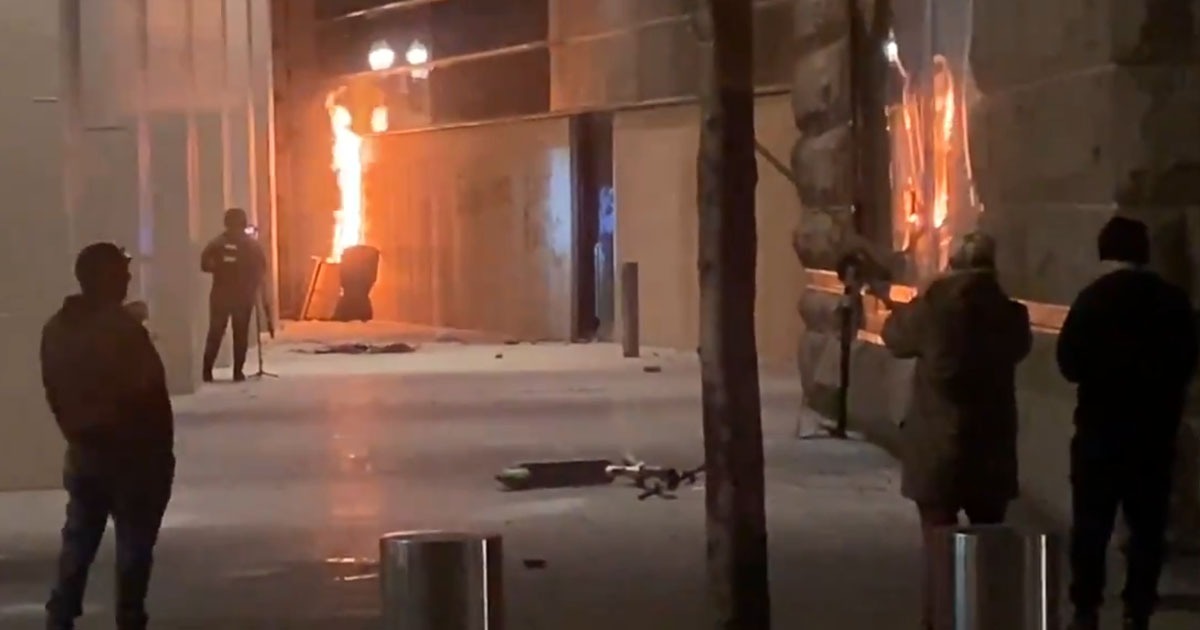 Video footage from Thursday nights’ Antifa riots in Portland shows multiple fires being set at the federal courthouse building by masked criminals, in a scene that at any other previous time in American history would be considered domestic terrorism.
According to Biden regime Attorney General Merrick Garland, however, only protests by right-wing demonstrators meet his definition of domestic terrorism. In his words, the Antifa attacks are much less serious because they “happened at night.”
At least 3 separate fires were set by Antifa rioters in Portland Thursday night, which were then captured on video by local news camera crews.
A group of around 50 are gathered at the federal courthouse building. Some people set a small fire near the entrance & others are spray painting the building with graffiti. #koin6news #pdx #pnw #Oregon #Portland pic.twitter.com/b1TKiZgvi7
— Jennifer Dowling (@JenDowlingKoin6) March 12, 2021
Another fire set outside the federal courthouse building. #koin6news #pdx #pnw #Oregon #Portland pic.twitter.com/G7troRSAFs
— Jennifer Dowling (@JenDowlingKoin6) March 12, 2021
Find Out More >
Someone in the group set fire to the plywood on the building at the entrance to the courthouse. Federal officers are responding with crowd control munitions. #koin6news #pdx #pnw #Oregon #Portland pic.twitter.com/pQS1IPV7iL
— Jennifer Dowling (@JenDowlingKoin6) March 12, 2021
During his Senate confirmation hearing, Garland elaborated on his politically biased definition of domestic terrorism:
Sen. Josh Hawley (R-MO) asked Garland, “Let me ask you about assaults on federal property in places other than Washington, D.C., Portland for instance, Seattle, do you regard assaults on federal courthouses or other federal property as acts of domestic extremism, domestic terrorism?”
“Well, Senator, my own definition, which is about the same as the statutory definition, is the use of violence or threats of violence, uh, in an attempt to disrupt democratic processes,” Garland responded.
The judge continued, “So an attack on a, uh, uh, uh, courthouse, while in operation, uh, trying to prevent judges from actually deciding cases, that plainly is, um, domestic, uh, um, uh, uh, domestic extremism, um, um, uh, uh, uh, domestic terrorism. Um, an attack simply on a government property at night or under any other kind of circumstances is a clear crime and serious one, and should be punished. I don’t mean, I don’t know enough about the facts of the example you’re talking about, but that’s where I draw the line, one is, both are criminal, but one is a core attack on our democratic institutions.”
Garland was confirmed in the Senate by a 70-30 margin this week.
National File has compiled the list of 20 Republicans who voted to confirm the anti-gun rights activist.
Share to Gab

Original Story: VIDEO: Antifa Sets Fire To Federal Courthouse, Not Considered Terrorism By AG Garland Because It Happened At Night