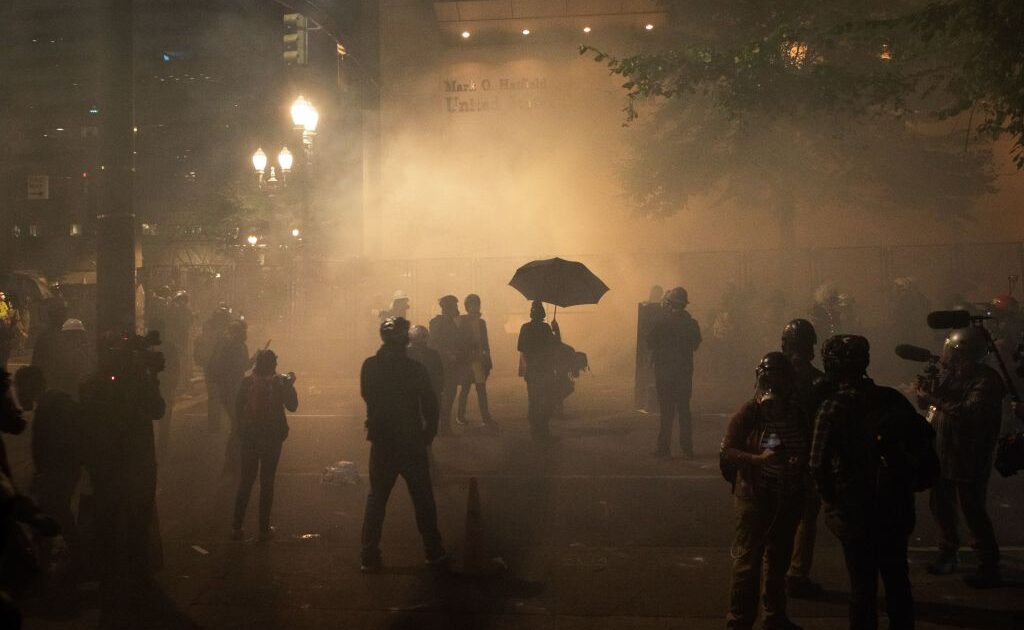 UPDATED 2:40 PM PT – Friday, March 12, 2021
The barriers around the Mark O. Hatfield federal courthouse had just been taken down this week when rioters in Portland once again targeted the building with violence.
Reports on Thursday said far-left activists damaged the building after trying to force their way inside. Officers were dispatched to the building in the late afternoon after a group of trespassers in the lobby reportedly refused to leave.
The situation escalated when they started damaging items inside the building. Work crews began boarding up the windows and doors in the early evening, prompting a larger group to gather and taunt police.
Antifa set fire to the federal courthouse in downtown Portland. There are people inside. #PortlandRiots #antifa pic.twitter.com/9sxBZkDe2t
— Andy Ngô (@MrAndyNgo) March 12, 2021The group eventually turned violent, smashing windows, burning flags and spraying graffiti on the side of the building. Officers had to use tear gas to push the rioters back, and at least one person was arrested.
This came just after crews removed the fencing around the building put up over the summer during the violent riots in the city. The courthouse itself saw several rounds of violence since demonstrations began last May.

PORTLAND, OREGON – JULY 27: People gathered to protest in front of the Mark O. Hatfield federal courthouse in downtown Portland as the city experienced another night of unrest on July 27, 2020 in Portland, Oregon. (Photo by Spencer Platt/Getty Images)

The riot began the same day Portland Mayor Ted Wheeler said he was seeking $2 million in police funding to address rising gun violence in the city.
According to reports, there have been 20 homicides in the city this year compared to only one the same time last year.
The move by Wheeler came after Portland leaders last year voted to cut around $16 million from the police budget. The cut included the elimination of a gun violence reduction unit.
#Antifa tried to smash their way into the Mark O. Hatfield federal courthouse. #PortlandRiots pic.twitter.com/f3MJltcZ7m
— Andy Ngô (@MrAndyNgo) March 12, 2021This week, reports said budget analysts recommended adding police funding in order to recruit 30 new officers. The current budget cut 84 full time positions from the police bureau, which were mostly vacant but were soon met with a wave of retirements and resignations. So far this fiscal year, 73 officers have retired and 39 have resigned.
The police bureau has not hired any officer in at least eight months and may not hire any by the end of the fiscal year due to the budget cuts.