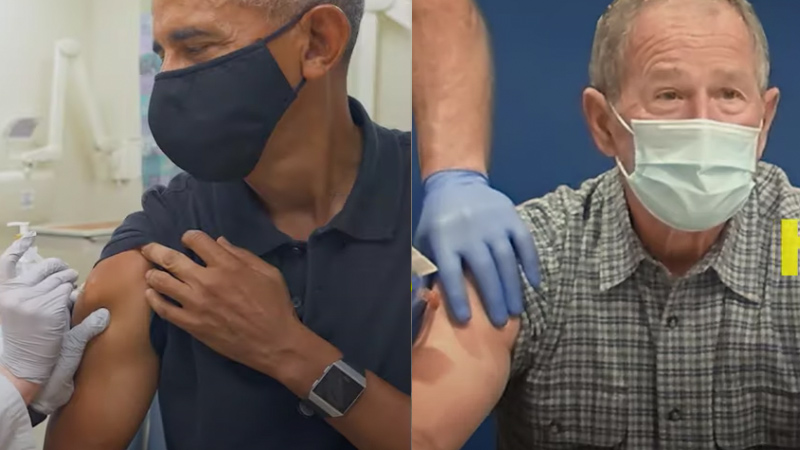 Barack Obama, Bill Clinton, George Bush and Jimmy Carter teamed up for a cringe public service announcement pushing the fast-tracked Covid vaccine on the public.
In a promo produced by the Ad Council and the Carter Center, the former presidents claim the vaccines are perfectly safe — never mind reports of adverse side effects or deaths.

“This vaccine means hope, it will protect you and those you love from this dangerous and deadly disease,” health insurance salesman Obama says, later accompanied

“We all want to go back to the things we love and miss,” a statement reads, suggesting proof of vaccination could soon be critical to do certain things.
Connecticut native George W. Bush puts on his best Texas accent and says he looks forward to going to opening day at Texas Rangers stadium.

The video ends with a montage of photos of the various presidents and their spouses being vaccinated, with even two-time presidential loser Hillary Clinton making a cameo.

Meanwhile, President Donald J. Trump is noticeably absent from the ad, despite his administration doing more to develop, manufacture and distribute the vaccine than any of the people in the video.
Do yourself a favor and don’t take medical advice from a washed-out globalist politician — do your own research and come to your own conclusions.