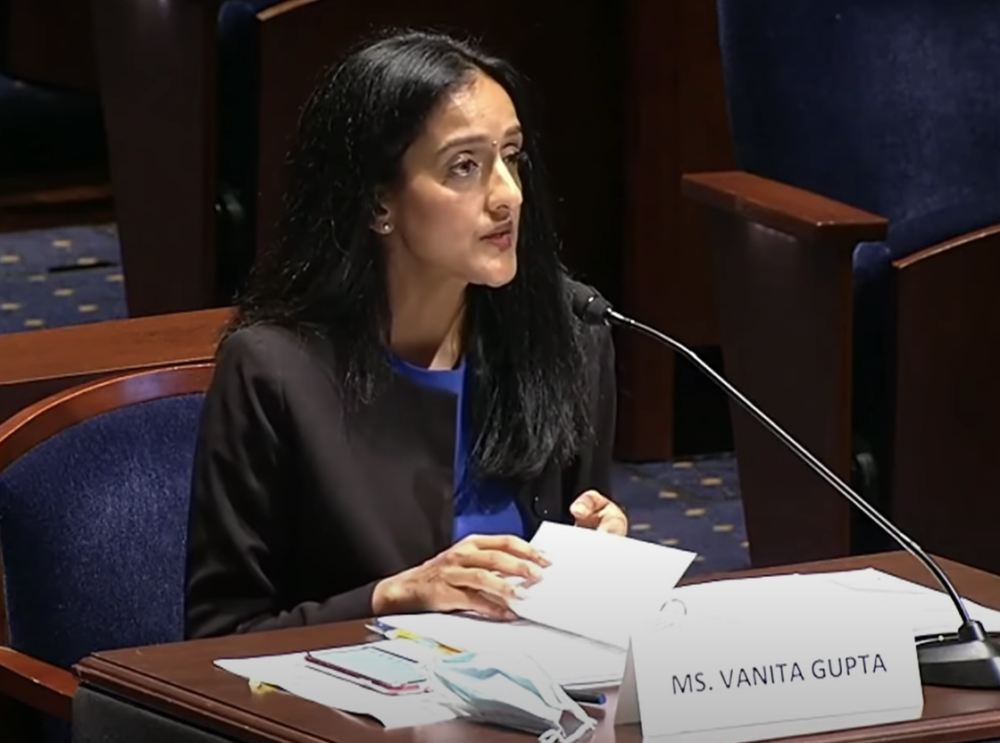 “You said in a question in response to institutional racism ‘there is not an institution in this country that isn’t suffering from institutional racism,’” Cotton said. “Ms. Gupta, is the Biden White House suffering from institutional racism?”
“Senator, given the history of this country, of slavery, and the long period of Jim Crow, and the ongoing scourge of racial discrimination, I think that it remains very much a live problem in America today, and that the effort to address racial discrimination in all of its forms, discrimination of any sorts, is something all of us have to work at, at the institutions we are apart of,” Gupta said.
Vanita Gupta’s outlandish claims that every single American harbors racial bias leave her unfit to serve at @TheJusticeDept.
Americans deserve a fair and impartial Department of Justice–not one led by someone who makes wild allegations. pic.twitter.com/nTLFTpn3ab
“So I will have the record reflect I asked you simply, does the Biden White House suffer from institutional racism and you didn’t want to respond,” Cotton said to Gupta. “…I don’t think you harbor racial bias towards any racial group or that you believe the Biden White House suffers from institutional racism, but when you throw around allegations that every single American suffers from racial bias, and every single institution suffers from institutional racism, you open yourself up to these kinds of questions.”
“By condemning your fellow Americans, without individualized evidence of their beliefs, their words, or their deeds, I think these statements were beyond the pale,” Cotton continued. “I don’t think really anybody truly believes them, nor should they be believed because there so preposterous.”
This is not the first time Gupta has suggested that America is a racist country. In a Senate Judiciary oversight hearing last summer, Sen. John Cornyn, R-Texas, asked Gupta as the president of the Leadership Conference on Civil and Human Rights, if the U.S. is institutionally racist.
“I think every American institution has been, kind of, shaped by these forces,” Gupta said. “I think we all have implicit bias and racial bias, yes, I do.”
WATCH: Sen. John Cornyn: “Do you believe that, basically, all Americans are racist?”
Former DOJ official Vanita Gupta: “I think we all have implicit bias and racial bias…”
Gupta: “And I think that we are an amazing country that strives to be better” every day. pic.twitter.com/5SxUox8mMA
Gupta is most well-known for her “defund the police” rhetoric, especially during the Antifa riots in response to the killing of George Floyd.
“[Defunding the police] means not just changing policing practices, but shrinking the footprint of the criminal legal system, including police, in Black and Brown people’s lives,” Gupta said in the June hearing. “And it means shifting our approach to public safety away from exclusive investments in criminalization and policing, toward investments in economic opportunity, education, health care, and other public benefits.”
Speaking to PBS in June, Gupta also reiterated her desire to defund police departments. “Without actually addressing the divestment in communities in terms of jobs, education, public transportation, healthcare, and the overinvestment in the criminalization model and all the infrastructure that exists around that, we actually are never going to have meaningful police reform,” she said.
Gupta’s hearings will continue this week in front of the Senate Judiciary Committee.
Gabe Kaminsky is an intern at The Federalist, and a student at the University of Pittsburgh. His work has appeared in The Daily Wire, Townhall.com, The Washington Times, The American Conservative, RealClearPolitics, The Washington Examiner, and other outlets. He is a participant in the Academy program at The Heritage Foundation. Follow him on Twitter @Gabe__Kaminsky
Photo PBS News Hour/Youtube
Associate Attorney General Biden confirmation hearing Gupta Joe Biden Judicary Committee judiciary Nominee President Biden Senate Tom Cotton Vanita Gupta