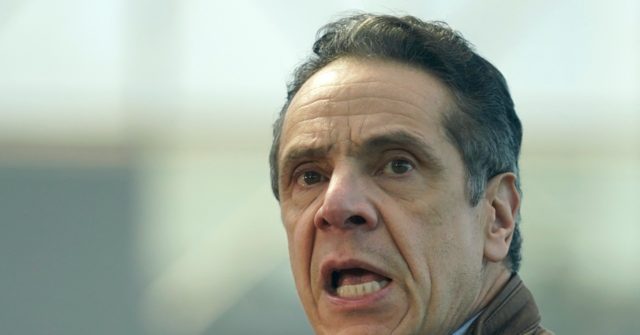 Report: Publisher Stops Promoting Gov. Andrew Cuomo’s Book, Cites Nursing Home Deaths Inquiry
1,163 SETH WENIG/POOL/AFP via Getty
Amy Furr
9 Mar 2021
Gov. Andrew Cuomo’s (D-NY) book publisher has reportedly halted promoting the text because of the probe into allegations targeting the withholding of data on nursing home deaths during the coronavirus pandemic.
As the New York Times reported Monday:
Sales of the book, “American Crisis: Leadership Lessons from the Covid-19 Pandemic,” had already slowed severely as the governor found himself embroiled in overlapping crises of his own making, including a drumbeat of accusations about his inappropriate behavior toward younger women and his aides’ manipulation of nursing home data.
Crown Publishing Group’s Gillian Blake told the Times there were “no plans” to reprint the book or reissue the text in paperback.
Blake cited “the ongoing investigation into N.Y.S. reporting of Covid-related fatalities in nursing homes,” the paper said.
Gov. Cuomo’s aides allegedly rewrote a report from state health officials to conceal 9,250 coronavirus deaths in nursing homes and long-term care facilities.
“The actual number of 9,250 nursing home deaths by June were much larger than the reported 6,432 nursing-home deaths — more than a 40 percent increase,” according to Breitbart News.
New York Assembly Republican Leader Will Barclay said Monday he is planning to circulate a resolution to impeach Cuomo as he faces the scandals.
“The governor’s lost so much credibility and trust that we don’t feel like he can go forward and govern. So we want to move ahead, do this impeachment assembly,” Barclay explained during a press conference.
However, New York City Mayor Bill de Blasio (D) did not call Monday for Gov. Cuomo to resign but did question how he can do his job as allies withdraw their support.
“I just don’t see how he can govern effectively when fewer and fewer people believe him. And I think there’s more information that’s going to come out that makes it harder and harder,” he told reporters.
The book, American Crisis, was published October 13 and since that time there have reportedly been 15,025 coronavirus deaths in New York, according to the Times article.
HealthPoliticsPre-ViralAndrew CuomocoronavirusNew York
.