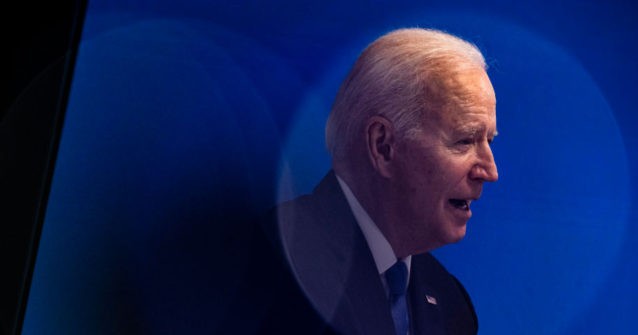 Brain Freeze: Joe Biden Struggles While Touting His $1.9 Trillion Spending Plan
269 Samuel Corum/Getty Images
Kyle Olson
8 Mar 2021
President Joe Biden suffered another brain freeze Saturday, trailing off and appearing to re-read a line from his remarks on a spending bill.
The candidate who received the most votes ever for president was touting the “American Rescue Plan,” the $1.9 trillion coronavirus spending bill passed by the Senate over the weekend.
Biden tries to explain the Covid bill. This moron is President? Wow. 😮 pic.twitter.com/s4KA6lCidQ
— 🇺🇸Maggie VandenBerghe🇺🇸 (@FogCityMidge) March 6, 2021
“The vast majority of economists — left, right, and center — from Wall Street to the, to the, private e—, private, uh, uh, uh, uh, uh, economic, uh, uh, polling, uh, initiatives,” Biden stammered.
“The economists, as I said, left, right, and center,” he continued, rereading his speech.
Last week, Biden appeared to have an unscripted moment when he asked for questions after speaking to members of the House Democrat caucus.
BIDEN: “I’m happy to take questions if that’s what I’m supposed to do…”
*White House feed cut* pic.twitter.com/y5BHhgXWOB
— The First (@TheFirstonTV) March 3, 2021
“I’m happy to take questions if that’s what I’m supposed to do, Nance, whatever you want me to do,” a seemingly uncertain Biden said to House Speaker Nancy Pelosi.
The president appeared to look off-camera for direction before his image was replaced with a graphic of the White House. His final comment was deleted from the video of the event posted to the White House YouTube page.
Breitbart News reported Biden has not held a solo press conference in the 45+ days he has been president, breaking a 100-year record.
White House Press Secretary Jen Psaki claimed Biden would hold one “before the end of the month.”
Kyle Olson is a reporter for Breitbart News. He is also host of “The Kyle Olson Show,” syndicated on Michigan radio stations on Saturdays–download full podcast episodes. Follow him on Parler.
EconomyHealthPoliticsAmerican Rescue PlancoronavirusJen PsakiJoe BidenThe Kyle Olson ShowWhite House
.