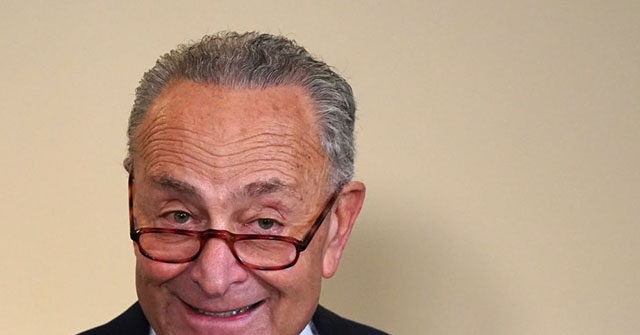 GOP: Senate-Passed Relief Bill Holds ‘Host of Non-COVID-Related Left-Wing Policies’
18 Jemal Countess/Getty Images
Hannah Bleau
6 Mar 2021
GOP senators, who voted against the Democrat-led Senate’s $1.9 trillion coronavirus relief measure on Saturday, sharply criticized the partisan measure upon its passing, emphasizing that it is filled with a “host of non-COVID-related left-wing policies.”
The Senate passed the measure 50-49 on Saturday along party lines. Republican Rep. Dan Sullivan (R-AK) was not present for the vote as he had to travel home for a family emergency.
While Senate Democrats celebrated the measure’s passage — Sen. Bernie Sanders (I-VT) described it as “the most significant piece of legislation to benefit working families in the modern history of this country” — Republicans warned that the bill contains a trove of left-wing pursuits unrelated to the Chinese coronavirus. House Minority Leader Kevin McCarthy (R-CA) highlighted similar concerns last week, noting that less than nine percent of the House bill went toward measures related to public health.
“I voted against this bill today because it could further wreck the economy and ignite inflation. This legislation includes a host of non-COVID-related left-wing policies,” Sen. Richard Shelby (R-AL) said in a statement, noting that “nine percent of the funding in the bill goes toward the immediate fight against COVID and one percent toward vaccines.”
The bill, he added, includes what he described as a “massive cash bailout for some mismanaged states and local governments.”
“Democrats are forcing a liberal wish list of pet projects through Congress that’s masked as a pandemic rescue package,” he added.
Sen. Ted Cruz (R-TX) also highlighted the bill’s shortfalls and, like his Republican colleagues, explained that just nine percent of the measure goes toward measures related to the pandemic.
“Instead of working in a bipartisan manner to open our schools, bring back small businesses, and help struggling Americans get back on their feet, Democrats chose to pander to their radical liberal base with partisan handouts,” the Texas senator said in a statement.
“This bill is stuffed with pork, with only nine percent of the almost $2 trillion going toward actual and urgent COVID relief,” he continued, emphasizing that the Democrat measure “shockingly provides COVID relief checks to illegal aliens and criminals behind bars.”
“I proposed two amendments to close these loopholes. Democrats voted in lockstep to ensure illegal aliens and prison inmates would still qualify for these rebates,” he said.
Sen. Tom Cotton (R-AR) also noted that Democrats voted to hand stimulus checks to criminals in prison.
“They haven’t lost their jobs, they aren’t worried about paying rent or buying groceries. Another example of the unrelated spending in the Democrats’ partisan slush fund,” he remarked.
Republican Sen. Shelley Moore Capito (R-WV) said Democrats effectively “took advantage” of the pandemic and poisoned the relief bill with unrelated spending measures that they have been in pursuit of for years.
“Many of my Democratic colleagues refer to this as a recovery package, but unlike the previous five COVID relief bills, this bill risks actually preventing our economy from recovering, which it is already showing signs of doing,” she said in a statement.
“This partisan bill attempts to fix problems that don’t exist, hamstring growth that has already begun, rewards bad decisions by elected officials, and opens the floodgates for unchartered levels of federal spending,” Capito added.
Sen. Cynthia Lummis (R-WY) described the bill as a “behemoth” stuffed with programs that “have nothing to do with the targeted, temporary relief the people of Wyoming need to weather the rest of this pandemic” and blasted Democrats for taking a partisan approach in this relief measure.
The National Republican Senatorial Committee (NRSC) released a statement following the bill’s passage, providing a list of some of the unrelated items embraced by Democrats in the “spending spree” bill. The NRSC’s list included:
Killing 1.4 million jobs during a pandemic
$50 million for “Environmental justice grants”
$1 billion for “racial justice” provisions for farmers
$1.7 billion for Amtrak
$175 million for the Corporation for Public Broadcasting
$135 million for the National Endowment for the Arts
Blocking accountability for Cuomo’s nursing home coverup
Refusing to get students back into classrooms
Bailing out failed Governors Andrew Cuomo and Gavin Newsom
Killing American energy jobs
Rejecting common-sense pension reforms
Using tax dollars to fund abortions and Planned Parenthood
Funding Sanctuary Cities who refuse to enforce immigration laws
Destroying women’s sports by allowing biological men to compete
Giving a paycheck to Senators who don’t do their jobs, such as passing a budget
Sending taxpayer-funded checks to illegal immigrants and prisoners
“It’s clear. The American people called for targeted relief, but Senate Democrats delivered their far left, radical wish list instead,” the NRSC said.
HealthPoliticscoronaviruscoronavirus reliefGOPSenate
.