DC Will Remain Under Military Occupation As Long As Pelosi Rules 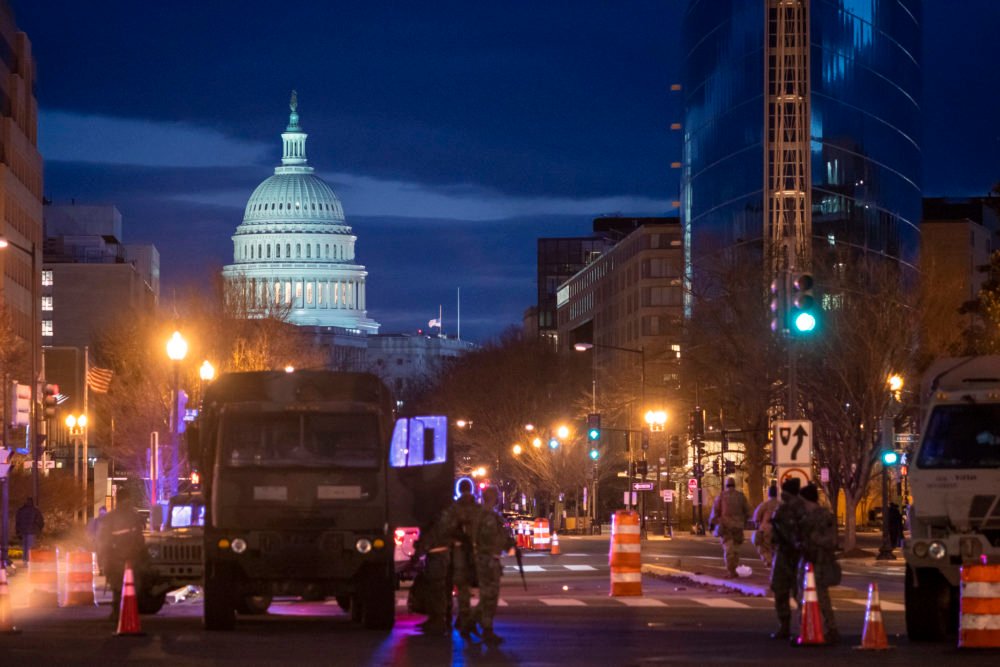 The new American reality under Joe Biden and Nancy Pelosi:
– An open national border with no guards; and
– A barbed wire fence at the Capitol to protect our politicians https://t.co/RO5kZ6tekh pic.twitter.com/nENR7i06G3
While a migrant crisis mounts on the southern border, aided by President Joe Biden’s day-one executive order bringing a halt to construction of the border wall, Washington politicians have surrounded themselves with miles of fencing to provide protection not afforded to the American people.
An estimated 25,000 troops descended on Washington in the immediate aftermath of the Capitol riots in early January, bringing more armed military forces to lock down the capital city than remain in Iraq and Afghanistan combined. As of this month, 6,000 troops remain an occupying force, supported by fencing around the Capitol that still stands at the order of Democratic politicians hellbent on exploiting the eruption of political violence at the start of the new year.
Meanwhile, no such security measures were offered to the business owners down the street when their livelihoods were blown up repeatedly in the name of social justice during the summer Black Lives Matter riots.
Reminder that our nation’s capital looked like this at the beginning of the summer and most Democrats/media shrugged it off as mostly peaceful https://t.co/1zvsLVRuQc
The Democrats and their allies in a complicit media either endorsed, downplayed, or ignored the repeated outbreaks of widespread political violence that gripped the nation’s cities all last year before then capitalizing on the January riot that targeted Congress this year, which was roundly condemned by Republicans and conservatives alike. Some are still whitewashing the wave of deadly left-wing extremism that terrorized cities for months, claiming there was no violence. The property damage in major cities left by just two weeks of the George Floyd riots, however, was 66 times more devastating than the estimated destruction in the Capitol.
The AP’s @JonLemire claims the George Floyd protests/riots, which led to an $2 billion in damages, 14,000 arrests, 20+ deaths & 12 cops shot, “were nonviolent.”
“These were nonviolent protesters, racially mixed, a lot of young people … There was no violence there.” pic.twitter.com/swRhZI3jp4
When a small force of federal troops was sent in to protect monuments of actual social justice warriors that were being vandalized by fake ones amid the unrest, their presence was vilified by the same Democrats now gaslighting the public with thousands of military men and women held in D.C. to protect the politicians.
Nancy Pelosi criticized the use of the military to guard the Lincoln Memorial after DC experienced multiple riots last year. pic.twitter.com/hY5UPNVacE
Most Americans likely underestimate the size of the barricade erected around the Capitol guarding politicians. The video below will provide some perspective:
Democrats show no signs of relieving the thousands of Guardsmen protecting the Capitol from their duty, however, as they raise hysteria time and again to justify the troops’ presence.
First, an explosion of unrest was supposed to occur in the days leading up to President Joe Biden’s inauguration in state capitals across the country. That didn’t happen.
Then, on Wednesday, a second attempt at “insurrection” was supposed to target the U.S. Capitol. That didn’t happen.
I was told there was going to be an insurrection? Guys you’re making me feel kinda silly down here. pic.twitter.com/E2peIa6gvc
There was never a threat to the Capitol. I tracked the “intel bulletins” when they attempted this stunt the 1st time. Fake intel justifies the military occupation, which justifies the narrative, which justifies the canceling of your rights, which justifies labeling you the enemy.
House Speaker Nancy Pelosi said at a Wednesday press conference the House will now consider permanent security measures for the Capitol next week.
“We have to ensure we are safe enough to do our job, but not impeding,” Pelosi told reporters.
New York freshman Democratic Rep. Jamaal Bowman echoed the House speaker’s sentiment.
.@JamaalBowmanNY: D.C. must remain under military occupation; “We must do everything we can to protect ourselves” pic.twitter.com/cWCrGlq9Nc
“We must do everything we can to protect ourselves,” Bowman said on MSNBC.
The business owners on Pennsylvania Avenue would have appreciated a fraction of the same concern as the politicians have afforded themselves, even in the aftermath of two false intelligence bulletins raising hysteria of renewed attacks on the Capitol since early January.
As long as Pelosi rules the Capitol, however, exploiting the crisis at the complex from a horde of Trump supporters, the people’s seat of government will remain in lockdown.
Tristan Justice is a staff writer at The Federalist focusing on the 2020 presidential campaigns. Follow him on Twitter at @JusticeTristan or contact him at [email protected]
Photo Mike Maguire / Flickr
Capitol Democrats Donald Trump House of Representatives Nancy Pelosi

Original Story: DC Will Remain Under Military Occupation As Long As Pelosi Rules