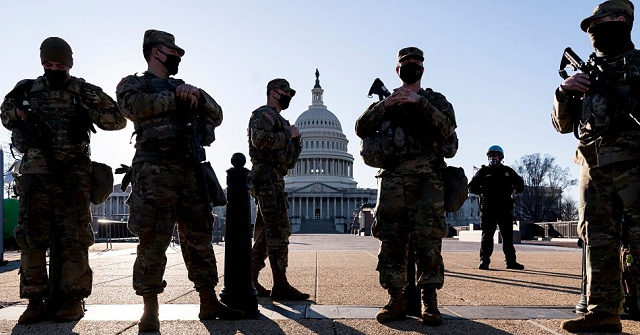 Top Armed Services GOP ‘Outraged’ National Guard Troops Asked to Stay in D.C. Without ‘Credible Theat’
162 AP Photo/J. Scott Applewhite
Kristina Wong
4 Mar 2021
Lawmakers are demanding to know why the Capitol Police is now requesting that the approximately 5,000 National Guard troops remain in the nation’s capital for another two months.
Local and federal law enforcement authorities requested National Guard assistance in the wake of the January 6 Capitol building breach and asked them to remain through the January 20 inauguration. Their numbers reached as high as over 26,000 in January.
Their mission is slated to end March 12, but on Thursday, lawmakers revealed there was a request by Capitol Police for the National Guard to remain another 60 days.
Senate Armed Services Committee Ranking Member Jim Inhofe (R-OK) said in a statement he is “outraged” they are being asked to stay without clear and specific information about why.
“I’m outraged that U.S. Capitol Police have requested to keep the nearly 5,000 National Guardsmen at the Capitol Complex for another two months without presenting clear and specific information. I haven’t been satisfied with any explanation Congress has received at numerous briefings that all these personnel, resources and barbed wire are needed,” he said.
“The Capitol Police have clearly stated that no specific credible threat exists — and what’s more, they haven’t provided the Department of Defense with any of the information needed to justify this request,” he added.
Inhofe noted that keeping the Capitol Complex safe has always been a federal civilian law enforcement responsibility.
“We can and should make improvements to how the Capitol Police protect the building, and there are plenty of options available to us, such as changes to the U.S. Capitol Police force structure, availability of a non-military quick reaction force and mobile fencing,” he said.
He added:
What this solution should not look like is keeping the National Guardsmen here indefinitely, as has been rumored. This is not their job or their mission — and the image this would paint on the world stage is concerning. I look forward to working with law enforcement agencies and my colleagues to improve Capitol security and get our Guardsmen back home to their families.
Last month, the Pentagon disclosed that the National Guard mission to protect the Capitol through mid-March would cost taxpayers $487 million. That figure will rise the longer soldiers stay.
Rep. Michael Waltz (R-FL), a National Guard colonel and Green Beret, has consistently asked for a briefing from the Pentagon on why National Guard troops are being asked to stay in D.C.
He said in a statement Thursday, “Speaker Pelosi continues to play politics behind closed doors regarding our security on Capitol Hill and lawmakers have been left in the dark for too long.”
“Before any extension for National Guard presence is finalized, lawmakers should be briefed on the latest intelligence threat assessments to determine the necessity of keeping our servicemembers away from their families and fulltime jobs,” he said.
“If more security is needed, it should by our Capitol Police with better planning and intelligence, not drawing from National Guardsmen and women that are needed for other missions such as vaccine distribution, natural disaster and overseas deployments,” he added.
Some Democrats also expressed concern about the request.
Rep. Elissa Slotkin (D-MI), a former intelligence and Pentagon official who revealed the request in a tweet on Thursday, tweeted that it was “critical” that Congress be briefed on decisions being made.
“Whether an extension has been requested or the mission is indeed terminating on March 12, it’s critical that members of Congress get a briefing on what’s behind these decisions,” she said.
Follow Breitbart News’s Kristina Wong on Twitter or on Facebook.
PoliticsCapitol PoliceElissa SlotkinJim InhofeMichael WaltzNational GuardPentagon
.