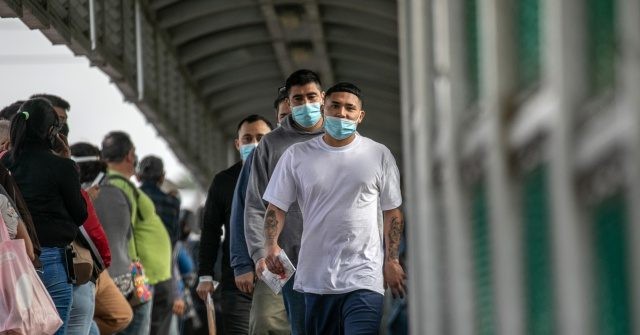 Joe Biden’s DHS Frees at Least 800 Border Crossers into U.S. in Four Days
103 John Moore/Getty Images
John Binder
5 Mar 2021
President Joe Biden’s Department of Homeland Security (DHS) has released at least more than 800 border crossers into the United States in the last four days, data reviewed by Breitbart News reveals.
In the first four days of March, the Customs and Border Protection (CBP) agency released about 814 border crossers into the U.S. interior — an average of about 204 releases every day this month — according to the data.
The bulk of those released are going to Brownsville, Texas; Yuma, Arizona; and Kingsville, Texas.
The releases are only a portion of the total border crossers being released, as the Immigration and Customs Enforcement (ICE) agency also releases border crossers on a daily basis into the U.S. interior. ICE officials have not provided Breitbart News with an updated total of releases for the month of February and the first week of March.
In February, the data showed that CBP released more than 1,900 border crossers into the U.S., which amounts to a daily average of about 69 releases every day for that month. In comparison, the totals show massive influxes compared to when President Trump was in office — before Biden ended the Remain in Mexico program and canceled cooperative asylum agreements with Central America.
In November 2020, for example, CBP released just eight border crossers into the U.S. interior. Similarly, in December 2020, just 19 border crossers were released by the agency. This means there has been a nearly 24,000 percent increase in releases from November 2020 to February 2021.
None of the border crossers released, except for those enrolled in the Remain in Mexico program, are required to test negative for the Chinese coronavirus.
Reports this week confirmed that border crossers are testing positive for the coronavirus after their release and still are not required to quarantine. In one case, a Honduran national who tested positive continued traveling to North Carolina.
The data is a reflection of the Biden administration’s widespread Catch and Release policy in which border crossers arriving at the U.S.-Mexico border can claim asylum, be quickly processed, and then be released into the nation’s interior with only a promise to appear at their court hearings at a later date.
In addition to Biden’s Catch and Release expansion, the administration is looking to transform the southern border into a welcoming and processing site for arrivals. Rather than seeking to control the inflow of border crossers, DHS wants to rebrand the process by managing the inflow, to include “Ellis Island-style rapid-processing hubs,” according to reports.
John Binder is a reporter for Breitbart News. Email him at jbinder@breitbart.com. Follow him on Twitter here.
ImmigrationPoliticsborder crosserscatch and releaseDepartment of Homeland SecurityDHSillegal immigrationJoe BidenRemain in MexicoSouthern Border
.