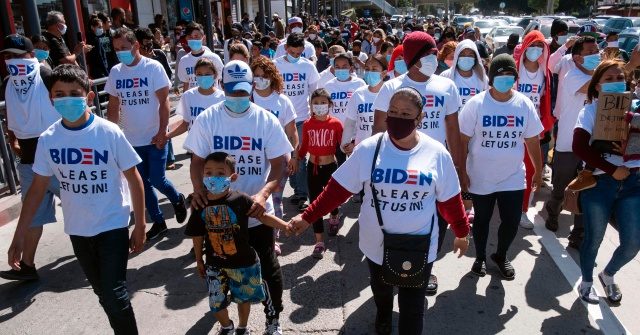 Donald Trump Releases Scathing Statement Demanding Joe Biden End ‘Border Nightmare’
45 GUILLERMO ARIAS/AFP via Getty Images
Charlie Spiering
5 Mar 2021
Former President Donald Trump issued a statement Friday challenging President Joe Biden for opening up the Southern border to a wave of migrants.
“Our border is now totally out of control thanks to the disastrous leadership of Joe Biden,” Trump wrote in a statement sent to reporters.
The former president sounded the alarm over the renewed surge of migrants headed for the border after the Biden administration sent a signal that unaccompanied migrants would be welcomed into the United States.
The Department of Homeland Security predicts there will be 117,000 unaccompanied child migrants crossing the border in 2021, according to an Axios report.
“A mass incursion into the country by people who should not be here is happening on an hourly basis, getting worse by the minute,” he said.
The number of migrant youth daily referred to the Department of Health and Human Services (HHS) for release into the United States has surged nearly 600 percent since President Trump was in office, according to newly released data, and federal shelters are at an estimated 93 percent of capacity.
Trump said that many migrants being allowed into the United States and illegal immigrants who are no longer being deported under Biden had criminal records or were infected with and spreading the coronavirus.
“The spiraling tsunami at the border is overwhelming local communities, depleting budgets, crowding hospitals, and taking jobs from legal American workers,” Trump wrote.
Biden has denied there is a crisis on the border, signaling confidence that his administration can handle the challenge.
But Trump recalled that he had achieved “the most secure border in our country’s history” during his presidency and condemned Biden’s recent actions that allowed the crisis to flare up.
“Under Biden, it will soon be worse, more dangerous, and more out of control than ever before,” Trump wrote. “He has violated his oath of office to uphold our Constitution and enforce our laws.”
Trump recalled his successful Remain in Mexico Policy for migrants claiming asylum as well as the Safe Third Agreements in Central America, and he berated Biden rolling them back and restoring catch-and-release policies.
“We put in place powerful rules and procedures to stop the smuggling and trafficking, but the Biden Administration has abandoned these proven strategies and instead given the smugglers and traffickers effective control of our border,” he wrote.
HealthImmigrationPoliticscatch and releaseCentral AmericaDepartment of Homeland SecurityDonald TrumpJoe BidenRemain in Mexico
.