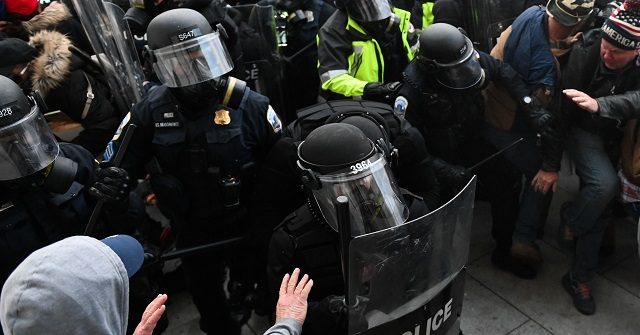 Report: Capitol Rioters Armed with Bear Spray, Not Guns
4 File Photo: ROBERTO SCHMIDT/AFP via Getty Images
AWR Hawkins
4 Mar 2021
A report by the Washington Examiner’s Byron York outlines January’s Capitol rioters were armed with bear spray, not guns.
York notes readers and news watchers may have the impression rioters had guns, as the riots are frequently described as an “armed insurrection.” In fact, York did a data search to find the phrase “armed insurrection” was used “2,339 times since January 6” to describe the riots.
However, he points out “the armed insurrectionists did not use any firearms.”
What York did find is that “a small number” of those taking part in the riots “did indeed have baseball bats or bear spray, and a few used flagsticks or even, in one case, a crutch as weapons to assault Capitol police.”
AOC on Capitol riot: “We came close to half of the House nearly dying on Wednesday.” https://t.co/I4nAcMDVUS
— Breitbart News (@BreitbartNews) January 11, 2021
Bear spray, crutches, etc., but no guns.
York recounted a line of questioning Wednesday between Sen. Ron Johnson (R-WI) and FBI assistant director for counterterrorism Jill Sanborn about firearm arrests or shots fired during the Capitol riots:
JOHNSON: How many firearms were confiscated in the Capitol or on Capitol grounds during that day?
SANBORN: To my knowledge, we have not recovered any on that day from any other arrests at the scene at this point. But I don’t want to speak on behalf of Metro and Capitol Police. But to my knowledge, none.
JOHNSON: So nobody has been charged with an actual firearm weapon in the Capitol or on Capitol grounds?
SANBORN: Correct. The closest we came was the vehicle that had the Molotov cocktails in it. And when we did a search of that vehicle later on, there was a weapon.
JOHNSON: How many shots were fired that we know of?
SANBORN: I believe the only shots that were fired were the ones that results in the death of the one lady.
On January 6, 2021, Breitbart News reported the name of the woman who was killed was Ashli Babbitt, a 14-year veteran who served four tours with the U.S. Airforce. Her husband told KUSI News that Babbitt was a strong supporter of President Donald Trump and a great patriot to all who knew her.
On February 2, 2021, NBC News reported no charges were being recommended for “the Capitol Police officer who fatally shot the Trump supporter.”
AWR Hawkins is an award-winning Second Amendment columnist for Breitbart News and the writer/curator of Down Range with AWR Hawkins, a weekly newsletter focused on all things Second Amendment, also for Breitbart News. He is the political analyst for Armed American Radio. Follow him on Twitter: @AWRHawkins. Reach him at awrhawkins@breitbart.com. You can sign up to get Down Range at breitbart.com/downrange.