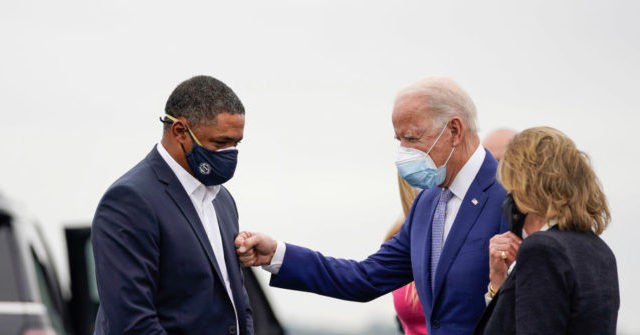 WH Senior Adviser: Biden Admin Will ‘Start Acting Now’ on Reparations
10,207 Drew Angerer/Getty Images
Amy Furr
2 Mar 2021
One of President Joe Biden’s senior advisers said recently the administration will begin acting immediately regarding reparations for black Americans.
Congress is debating forming a commission to study the issue and how reparations might be implemented, but Cedric Richmond told Axios on HBO during an interview the administration did not want to wait, the outlet reported Monday.
“We don’t want to wait on a study. We’re going to start acting now,” he said. “We have to start breaking down systemic racism and barriers that have held people of color back and especially African-Americans. We have to do stuff now.”
Although a timeline for the commission is unknown, Richmond (pictured, left) said, “if you start talking about free college tuition to [historically black colleges and universities] and you start talking about free community college in Title I and all of those things, I think that you are well on your way.”
Last month, White House Press Secretary Jen Psaki told reporters President Biden would support a study on whether descendants of slavery in America should receive reparations.
“He would certainly support a study of reparations. He understands that we don’t need a study to take action right now on systemic racism, so he wants to take actions in his own government in the meantime,” she said.
However, Rep. Burgess Owens (R-UT) voiced opposition to reparations during his opening remarks February 17 as a member of a House Judiciary subcommittee on civil rights and civil liberties.
“Reparations is not the way to right our country’s wrongs,” he explained. “It is impractical and a non-starter for the United States government to pay reparations. It is also unfair and heartless to give black Americans the hope that this is a reality.”
NFL legend Herschel Walker cited his faith in his testimony against Democrats’ proposal to establish the commission and told lawmakers, “we use black power to create white guilt.”
“My approach is biblical. How can I ask my Heavenly Father to forgive me if I can’t forgive my brother?” he asked.
“I never want to put any one religion down; my religion teaches togetherness. Reparations teach separation,” Walker concluded.
PoliticsPre-ViralSocial JusticeCedric RichmondEquityJoe Bidenreparations
.