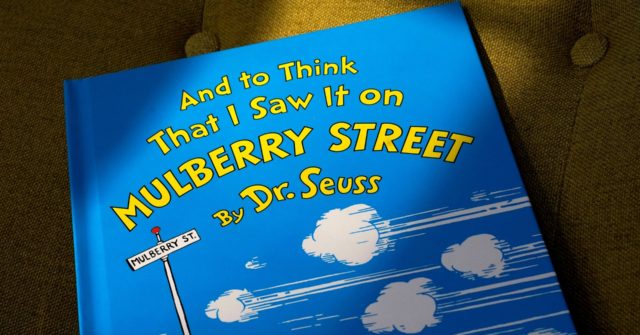 Banned Dr. Suess Books Spike Nearly 50,000% on Amazon Sales Ranking Chart
3,342 AP Photo/Steven Senne
Charlie Spiering
2 Mar 2021
Sales of recently announced banned Dr. Suess books spiked on Amazon.com Tuesday after they were “canceled” by the left.
Dr. Suess’s books were among the leading 17 on the top 50 list of Amazon’s “movers and shakers” on Tuesday morning after the ban was announced.
The books McElligot’s Pool, On Beyond Zebra!, Scrambled Eggs Super!, And to Think That I Saw It on Mulberry Street, If I Ran the Zoo and The Cat’s Quizzer will no longer be published according to a statement released Tuesday by Dr. Suess Enterprises.
“These books portray people in ways that are hurtful and wrong,” Dr. Seuss Enterprises told The Associated Press in a statement.
But the sales rank of the book “And to Think That I Saw It on Mulberry Street” was up 45,930 percent on the list and was ranked number one.
Scrambled Eggs Super! and On Beyond Zebra was ranked number three and number four.

Amazon.com Movers and Shakers 3/2/21
Scrambled Eggs Super! was listed as “out of stock” on Amazon with paperback versions selling for $987.25.

Amazon.com Dr. Suess
A Virginia school district banned the author’s books from their Read Across America program on Monday.
Dr. Seuss is now racist. Consider this your woke Cancel Culture warning in the event your children are spotted with copies and/or authorities find out you’ve read these stories to your children. https://t.co/f8LxJqC72t
— Breitbart News (@BreitbartNews) March 1, 2021
President Joe Biden eliminated all mentions of Dr. Suess in his proclamation to celebrate Read Across America day, despite eager endorsements of the author by his predecessor President Barack Obama.
In 2016, President Obama wrote, “March 2 is also the birthday of one of America’s revered wordsmiths. Theodor Seuss Geisel — or Dr. Seuss — used his incredible talent to instill in his most impressionable readers universal values we all hold dear.”