DHS Sec. Alejandro Mayorkas: There Is No Crisis on the Border 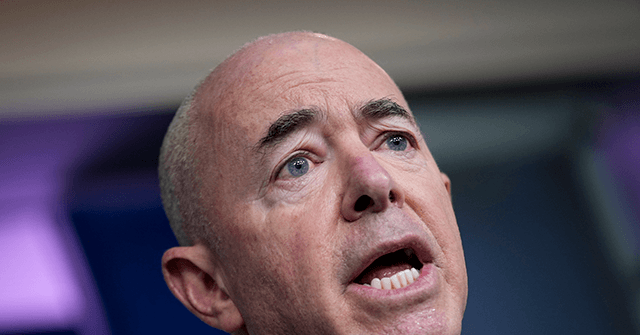 DHS Sec. Alejandro Mayorkas: There Is No Crisis on the Border
130 Drew Angerer/Getty Images
Charlie Spiering
1 Mar 2021
Department of Homeland Security Secretary Alejandro Mayorkas declared Monday there is no crisis on the southern border, despite a growing number of migrants and unattended minors crossing into the United States.
“I think the answer is no,” Mayorkas said when asked by a reporter if there was a crisis on the border. “I think there is a challenge at the border that we are managing, and we have our resources dedicated to managing it.”
Mayorkas appeared at the White House press briefing on Monday with press secretary Jen Psaki to address the growing number of questions about Biden’s handling of the border.
In January 2021, Border Patrol agents apprehended 5,871 unaccompanied minors — up from 4,995 in December 2020.
One reporter noted 200 migrant children cross the border every single day, as border officials estimate a peak of 13,000 children in the month of May.
When confronted with the numbers, Mayorkas acknowledged there was an “acute” challenge on the border, but that Homeland Security was working to fix it.
“It is a stressful challenge, and that is why quite frankly, we are working as hard as we are,” he said.
He added the department would also work to “meet our humanitarian aspirations” while handling illegal immigrants and migrants claiming asylum, as Biden promised during the campaign.
“We are not saying don’t come,” he said. “We are saying don’t come now because we will be able to deliver a safe and orderly process to them as quickly as possible.”
Mayorkas blamed the Trump administration for the current crisis, telling reporters he was shocked at what he discovered after becoming the secretary.
“Quite frankly, the entire system was gutted,” he said.
He urged immigration activists to be patient as he addressed the current challenges.
“It takes time to build out of the depths of cruelty that the administration before us established,” he said.
ImmigrationPoliticsAlejandro MayorkasborderJen PsakiJoe BidenWhite House
.

Original Story: DHS Sec. Alejandro Mayorkas: There Is No Crisis on the Border