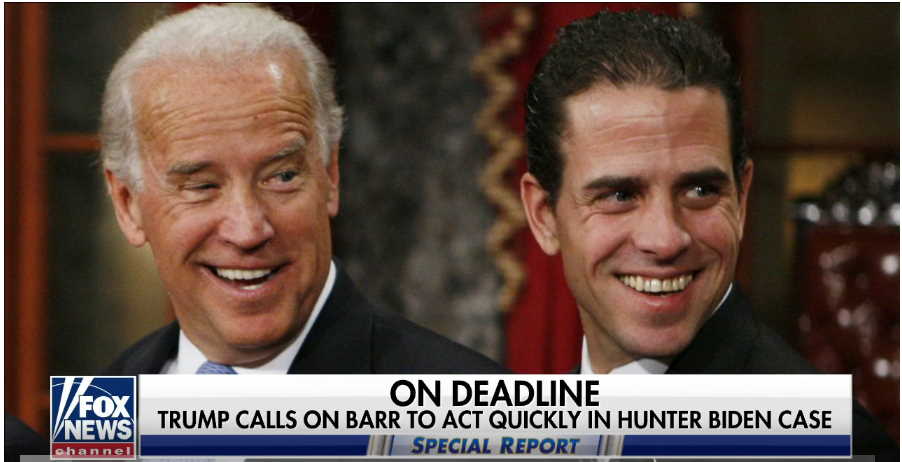 The FBI and Justice Department concur with DNI Ratcliffe that the laptop is not part of a Russian disinformation campaign.

The FBI is in possession of the laptop purportedly belonging to Hunter Biden which contained emails revealing his foreign business dealings, including contacts in Ukraine and China, two senior administration officials told Fox News Tuesday.

The FBI declined to confirm or deny the existence of an investigation into the laptop or the emails, as is standard practice.

Further, Fox News has learned that the FBI and Justice Department officials concur with an assessment from Director of National Intelligence John Ratcliffe that the laptop is not part of a Russian disinformation campaign targeting Democratic presidential nominee Joe Biden.

Ratcliffe, on Monday, said that Hunter Biden’s laptop and the emails on it “is not part of some Russian disinformation campaign,” despite claims from House Intelligence Committee Chairman Adam Schiff, D-Calif.

Ratcliffe went on to say that it is “simply not true.”

“If you thought it wasn’t possible for Schiff to have any less credibility, DOJ just proved you wrong,” a senior intelligence official told Fox News.

The FBI, in a letter to Senate Homeland Security and Governmental Affairs Chairman Ron Johnson, R-Wis., who is investigating Hunter Biden’s business dealings, as well as the laptop in question, said that the bureau has “nothing to add at this time to the October 19th public statement by the Director of National Intelligence about the available actionable intelligence.”

“If actionable intelligence is developed, the FBI in consultation with the Intelligence Community will evaluate the need to provide defensive briefings to you and the Committee pursuant to the established notification framework,” the letter stated.

The emails in question were first obtained by the New York Post and, in part, revealed that Hunter Biden allegedly introduced his father, the then-vice president, to a top executive at Ukrainian natural gas firm Burisma Holdings less than a year before he pressured government officials in Ukraine to fire prosecutor Viktor Shokin, who was investigating the company’s founder.

The Post report revealed that Biden, at Hunter’s request, met with the executive, Vadym Pozharskyi, in April 2015 in Washington, D.C.

The meeting was mentioned in an email of appreciation, according to the Post, that Pozharskyi sent to Hunter Biden on April 17, 2015 — a year after Hunter took on his position on the board of Burisma.

“Dear Hunter, thank you for inviting me to DC and giving an opportunity to meet your father and spent [sic] some time together. It’s realty [sic] an honor and pleasure,” the email read.

The Biden campaign told Fox News Sunday that the former vice president “never had a meeting” with Pozharskyi.

Biden, prior to the emails surfacing, repeatedly has claimed he’s “never spoken to my son about his overseas business dealings.”

Hunter Biden’s business dealings, and his role on the board of Burisma, emerged during the Trump impeachment inquiry in 2019.

Another email, dated May 13, 2017, and obtained by Fox News, includes a discussion of “renumeration packages” for six people in a business deal with a Chinese energy firm. The email appeared to identify Hunter Biden as “Chair/ Vice Chair depending on an agreement with CEFC,” in an apparent reference to now-bankrupt CEFC China Energy Co.

The email includes a note that “Hunter has some office expectations he will elaborate.” A proposed equity split references “20” for “H” and “10 held by H for the big guy?” with no further details.

Fox News spoke to one of the people who was copied on the email, who confirmed its authenticity.

Sources also told Fox News that “the big guy” was a reference to the former vice president. The New York Post initially published the emails, and others, that Fox News has also obtained.

While Biden has not commented on that email, or his alleged involvement in any deals with the Chinese Energy firm, his campaign said it released the former vice president’s tax documents and returns, which do not reflect any involvement with Chinese investments.

Fox News also obtained an email last week that revealed an adviser of Burisma Holdings, Vadym Pozharskyi, wrote an email to Hunter Biden on May 12, 2014, requesting “advice” on how he could use his “influence to convey a message” to “stop” what the company considers to be “politically motivated actions.”

“We urgently need your advice on how you could use your influence to convey a message / signal, etc .to stop what we consider to be politically motivated actions,”  Pozharskyi wrote.

The email, part of a longer email chain obtained by Fox News, appeared to be referencing the firm’s founder, Mykola Zlochevsky, being under investigation.

Meanwhile, additional documents obtained by Fox News include FBI paperwork that details the bureau’s interactions with John Paul Mac Isaac, the owner of “The Mac Shop” who reported the laptop’s contents to authorities, as first reported by the New York Post.

Isaac received a subpoena to testify before U.S. District Court in Delaware on Dec. 9, 2019, the documents show. One page shows what appears to be serial numbers for a laptop and hard drive taken into possession.

So far, the FBI and Delaware’s U.S. Attorney’s office have declined to publicly comment on the situation.