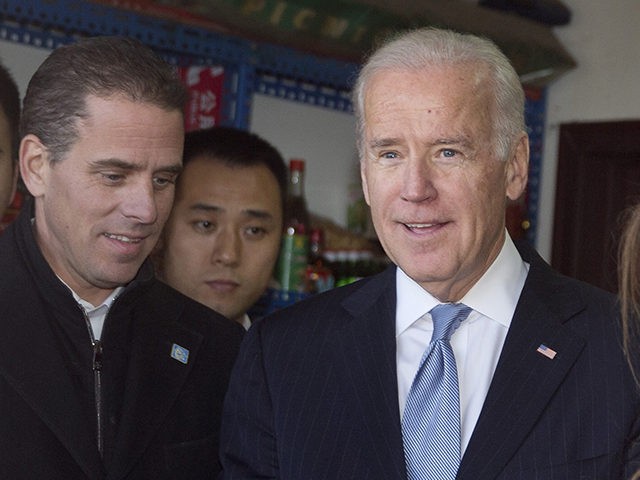 Rep. Lee Zeldin (NY), the top Republican on the House Foreign Affairs Subcommittee on Oversight and Investigations, called Friday for the Justice Department and the FBI to open a “criminal investigation” into the Biden family after reports that Hunter Biden used connections to his father when he was vice president when doing lucrative overseas business deals.

Zeldin tweeted: “The DOJ/FBI needs to open a criminal investigation into the Biden Family’s global pay to play operation.”

Zeldin also serves on the House Committee on Financial Services and served on the president’s impeachment defense team.

Zeldin’s call comes after a series of reports stemming from emails found on a hard drive that Hunter Biden or an associate reportedly dropped off at a computer repair store in Delaware but never picked up. The laptop was reportedly turned over to the FBI in December 2019.

One report by the New York Post published an email that allegedly showed Hunter Biden had arranged a meeting between a business associate from Burisma, a Ukrainian natural gas company that was facing a corruption investigation, and his father when he was serving as vice president.

A follow-up Post report on Hunter Biden’s international business deals with a Chinese state-owned energy firm published other emails, including one from August 2, 2017, in which he wrote that the firm’s then-chairman had offered him $10 million annually for “introductions alone.”

In that same email chain, he wrote, “Consulting fees is one piece of our income stream but the reason this proposal by the chairman was so much more interesting to me and my family is that we would also be partners inn [sic] the equity and profits of the JV’s [joint venture’s] investments.”

Another email, sent from a business associate on May 13, 2017, that discussed a percentage of shares in a business venture to be split among four people, identified Hunter Biden as “H” and had a “20” next to it. It also said: “10 held by H for the big guy ?” but did not specify who “the big guy” is.

Fox News subsequently reported that sources told the outlet that “the big guy” is a reference to the former vice president.

Nineteen House Republicans have also written a letter to the FBI, demanding to know if they knew Hunter Biden had arranged the meeting with the Burisma executive with then-Vice President Joe Biden at the same time House Democrats were trying to impeach President Donald Trump for asking Ukraine’s president to assist Attorney General Bill Barr with any evidence of such corruption.

“A large portion of the president’s legal defense case revolved around strong evidence that former Vice President Biden’s son Hunter was peddling his influence to his father to land lucrative jobs overseas that he might not have otherwise been qualified for,” the letter said.

“If the FBI was, in fact, in possession of this evidence and failed to alert the White House to its existence that would have given even more weight to the president’s legal defense, this was a gross error in judgement and a severe violation of trust,” it added.