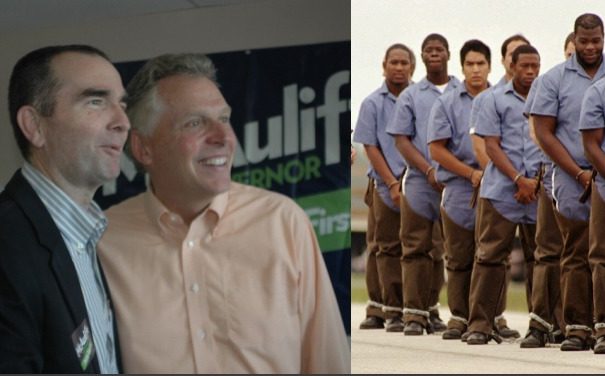 Virginia Governor Ralph “Blackface” Northam is calling for backup ahead of an election cycle Democrats fear could sweep them out of power in the state, restoring voting rights for over 69,000 convicted felons less than 8 months ahead of Election Day.
While incumbent Northam isn’t eligible for re-election himself due to consecutive term limiting, his old boss Terry McAuliffe is, and he’s running to become the first Virginia Governor in nearly half a century to be elected to two non-consecutive terms. As Governor, McAuliffe had no issue using even the most violent of convicted felons for Democrat political purposes, once bragging that he had re-enfranchised more felons than any Governor in American history.
Now, it would appear his successor and former Lieutenant is taking a page from his book just in time for McAuliffe, the presumptive Democrat nominee for Governor, to face off against a tsunami of support for Republican and conservative causes, a tsunami which has only gained in strength as evidence of severe 2020 Democrat election fraud in Virginia continues to mount.
Northam’s new executive order effectively provides a shortcut for Democrats to register legions of criminal voters without being forced to go through the process of seeing a constitutional amendment approved. Despite a similar effort to amend the state’s constitution already being in the works, the process would be far from complete by the time Election Day 2021 rolls around and therefore, would be of no benefit to Northam, McAuliffe, and their party at the time being.
Under the order, convicted felons released from prison will see their voting rights immediately restored, regardless of probation status or the existence of outstanding arrest warrants and criminal charges.
While the move will almost certainly be challenged in court, as a similar move by McAuliffe ahead of the 2016 Presidential Election was, as was the case then, a potential ruling will almost certainly come well after Election Day and well after the damage to Virginia’s elections has been done.
Meanwhile, U.S. House candidate Jarome Bell has called for Northam’s arrest after he was implicated in a COVID-19 nursing home scandal reminiscent of the scandal New York Governor Andrew Cuomo finds himself facing.
Tags: 2021 ElectionsMcAuliffenorthamVirginiaVoting RightsShare to Gab