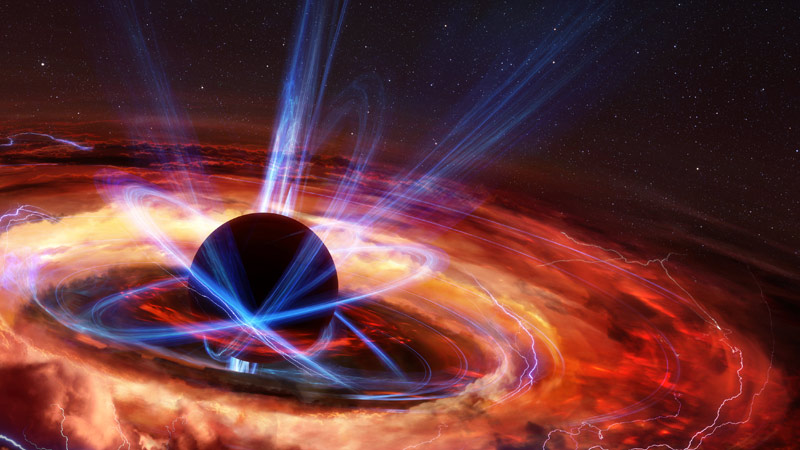 Researchers using NASA’s upcoming James Webb Space Telescope will map and model the core of nearby galaxy Centaurus A.
Centaurus A is a giant of a galaxy, but its appearances in telescope observations can be deceiving. Dark dust lanes and young blue star clusters, which crisscross its central region, are apparent in ultraviolet, visible, and near-infrared light, painting a fairly subdued landscape. But by switching to X-ray and radio light views, a far more raucous scene begins to unfold: From the core of the misshapen elliptical galaxy, spectacular jets of material have erupted from its active supermassive black hole—known as an active galactic nucleus—sending material into space well beyond the galaxy’s limits.

What, precisely, is happening at its core to cause all this activity? Upcoming observations led by Nora Lützgendorf and Macarena García Marín of the European Space Agency using NASA’s James Webb Space Telescope will allow researchers to peer through its dusty core in high resolution for the first time to begin to answer these questions.
“There’s so much going on in Centaurus A,” explains Lützgendorf. “The galaxy’s gas, disk, and stars all move under the influence of its central supermassive black hole. Since the galaxy is so close to us, we’ll be able to use Webb to create two-dimensional maps to see how the gas and stars move in its central region, how they are influenced by the jets from its active galactic nucleus, and ultimately better characterize the mass of its black hole.”
Centaurus A’s dusty core is apparent in visible light, but its jets are best viewed in X-ray and radio light. With upcoming observations from NASA’s James Webb Space Telescope in infrared light, researchers hope to better pinpoint the mass of the galaxy’s central supermassive black hole as well as evidence that shows where the jets were ejected. Credit: X-ray: NASA/CXC/SAO; optical: Rolf Olsen; infrared: NASA/JPL-Caltech; radio: NRAO/AUI/NSF/Univ.Hertfordshire/M.Hardcastle
A Quick Look Back
Let’s hit “rewind” to review a bit of what is already known about Centaurus A. It’s well studied because it’s relatively nearby—about 13 million light-years away—which means we can clearly resolve the full galaxy. The first record of it was logged in the mid-1800s, but astronomers lost interest until the 1950s because the galaxy appeared to be a quiet, if misshapen, elliptical galaxy. Once researchers were able to begin observing with radio telescopes in the 1940s and ’50s, Centaurus A became radically more interesting—and its jets came into view. In 1954, researchers found that Centaurus A is the result of two galaxies that merged, which was later estimated to have occurred 100 million years ago.
With more observations in the early 2000s, researchers estimated that about 10 million years ago, its active galactic nucleus shot out twin jets in opposite directions. When examined across the electromagnetic spectrum, from X-ray to radio light, it’s clear there is far more to this story that we still have to learn.
“Multi-wavelength studies of any galaxy are like the layers of an onion. Each wavelength shows you something different,” said Marín. “With Webb’s near- and mid-infrared instruments, we’ll see far colder gas and dust than in previous observations, and learn much more about the environment at the center of the galaxy.”

Supermassive black holes, which lie at the centers of galaxies, are voracious. They periodically “sip” or “gulp” from the swirling disks of gas and dust that orbit them, which can result in massive outflows that affect star formation locally and farther afield. When NASA’s James Webb Space Telescope begins observing galaxies’ cores, its infrared instruments will pierce through the dust to deliver images and incredibly high-resolution data that allow researchers to learn precisely how one process sets off another, and how they create an enormous feedback loop. Credit: NASA, ESA, and L. Hustak (STScI)
Visualizing Webb’s Data
The team led by Lützgendorf and Marín will observe Centaurus A not only by taking images with Webb, but by gathering data known as spectra, which spread out light into its component wavelengths like a rainbow. Webb’s spectra will reveal high-resolution information about the temperatures, speeds, and compositions of the material at the center of the galaxy.
In particular, Webb’s Near Infrared Spectrograph (NIRSpec and Mid-Infrared Instrument (MIRI) will provide the research team with a combination of data: an image plus a spectrum from within each pixel of that image. This will allow the researchers to build intricate 2D maps from the spectra that will help them identify what’s happening behind the veil of dust at the center—and analyze it from many angles in depth.
Compare this style of modeling to the analysis of a garden. In the same way botanists classify plants based on specific sets of features, these researchers will classify spectra from Webb’s MIRI to construct “gardens” or models. “If you take a snapshot of a garden from a great distance away,” Marín explained, “You will see something green, but with Webb, we will be able to see individual leaves and flowers, their stems, and maybe the soil underneath.”
As the research team digs into the spectra, they’ll build maps from individual parts of the garden, comparing one spectrum to another nearby spectrum. This is analogous to determining which parts contain which plant species based on comparisons of “stems,” “leaves,” and “flowers” as they go.
The jets and winds from a supermassive black hole affect its host galaxy – and the space hundreds of thousands of light-years away over millions of years. Credit: NASA, ESA, and L. Hustak (STScI)
“When it comes to spectral analysis, we conduct many comparisons,” Marín continued. “If I compare two spectra in this region, maybe I will find that what was observed contains a prominent population of young stars. Or confirm which areas are both dusty and heated. Or maybe we will identify emission coming from the active galactic nucleus.”
In other words, the “ecosystem” of spectra has many levels, which will allow the team to better define precisely what is present and where it is—which is made possible by Webb’s specialized infrared instruments. And, since these studies will build on many that came before, the researchers will be able to confirm, refine, or break new ground by identifying new features.
Weighing the Black Hole in Centaurus A
The combination of images and spectra provided by NIRSpec and MIRI will allow the team to create very high-resolution maps of the speeds of the gas and stars at the center of Centaurus A. “We plan to use these maps to model how the entire disk at the center of the galaxy moves to more precisely determine the black hole’s mass,” Lützgendorf explains.
Since researchers understand how the gravity of a black hole governs the rotation of nearby gas, they can use the Webb data to weigh the black hole in Centaurus A. With a more complete set of infrared data, they will also determine if different parts of the gas are all behaving as anticipated. “I’m looking forward to fully filling out our data,” Lützgendorf said. “I hope to see how the ionized gas behaves and twirls, and where we see the jets.”
The researchers are also hoping to break new ground. “It’s possible we’ll find things we haven’t considered yet,” Lützgendorf explains. “In some aspects, we’ll be covering completely new territory with Webb.” Marín wholeheartedly agrees, and adds that building on a wealth of existing data is invaluable. “The most exciting aspects about these observations is the potential for new discoveries,” she said. “I think we might find something that makes us look back to other data and reinterpret what was seen earlier.”
These studies of Centaurus A will be conducted as part of Gillian Wright and Pierre Ferruit’s joint MIRI and NIRSpec Guaranteed Time Observations programs. All of Webb’s data will ultimately be stored in the publicly accessible Barbara A. Mikulski Archive for Space Telescopes (MAST) at the Space Telescope Science Institute in Baltimore.
Share