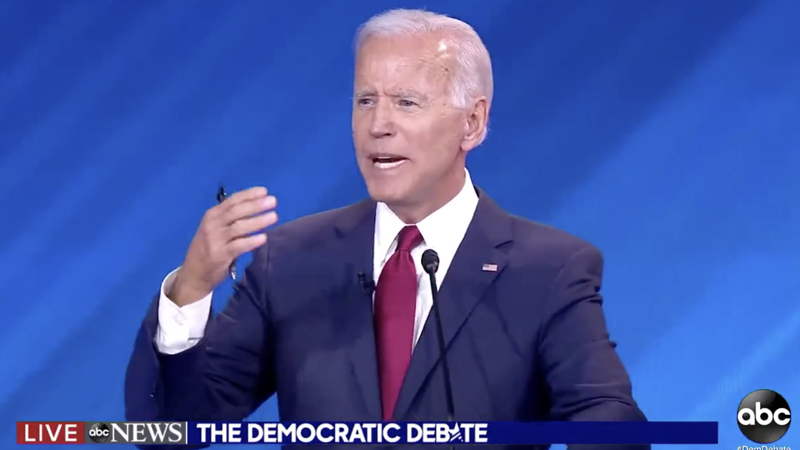 Joe Biden warned in 2019 that the record migrant surge now gripping the U.S. southern border was part of a promise he said he’d keep if he became president.
During an October 2019 Democratic primary debate in Ohio, Biden claimed that illegal immigrants should “immediately surge to the border” if he got elected as president.

“I would in fact make sure that there is – that we immediately surge to the border all those people who are seeking asylum,” Biden said.
Flashback:

In the first Democratic primary debate, Biden says when he’s president, illegal immigrants should “immediately surge to the border” pic.twitter.com/Fq1vCNEN75
— Tom Elliott (@tomselliott) March 17, 2021
“They deserve to be heard. That’s who we are,” he continued. “We’re a nation that says ‘if you want to flee and you’re fleeing oppression, you should come!”
This comes as record numbers of migrants are surging the southern border, with 13,000 unaccompanied children alone in border patrol custody.
The numbers are so overwhelming, and capacity so overextended, that disturbing photos emerging from the southern border show throngs of people huddled up under a bridge in Missions, Texas, surrounded by construction tape.

Earlier this month, DHS Secretary Alejandro Mayorkas urged migrants to “wait” to surge the border until they can “deliver a safe and orderly process” for them to enter the United States, effectively endorsing illegal immigration at a designated point in time.

“I have to take this opportunity to reiterate a message…and that is a message to those individuals who are thinking of coming to our border: they need to wait,” Mayorkas said. “It takes time to rebuild the system from scratch.”
“We are not saying don’t come, we’re saying don’t come now, because we will be able to deliver a safe and orderly process to them as quickly as possible,” he added.
But the crisis at the border has spiraled into such a humanitarian disaster that Biden himself had to walk back the inviting messaging his administration has been putting out.
“I can say quite clearly: Don’t come over,” Biden told ABC News’ George Stephanopoulos on Tuesday. “Don’t leave your town or city or community.”
The eye-opening reports and photos from the border have become so damaging to Biden that he’s imposed a media gag order on border patrol agents, using the excuse of COVID-19 precautions.
By contrast, President Trump allowed the media to tour migrant holding facilities on numerous occasions during the George Soros-backed caravan surges in 2018 and 2019.