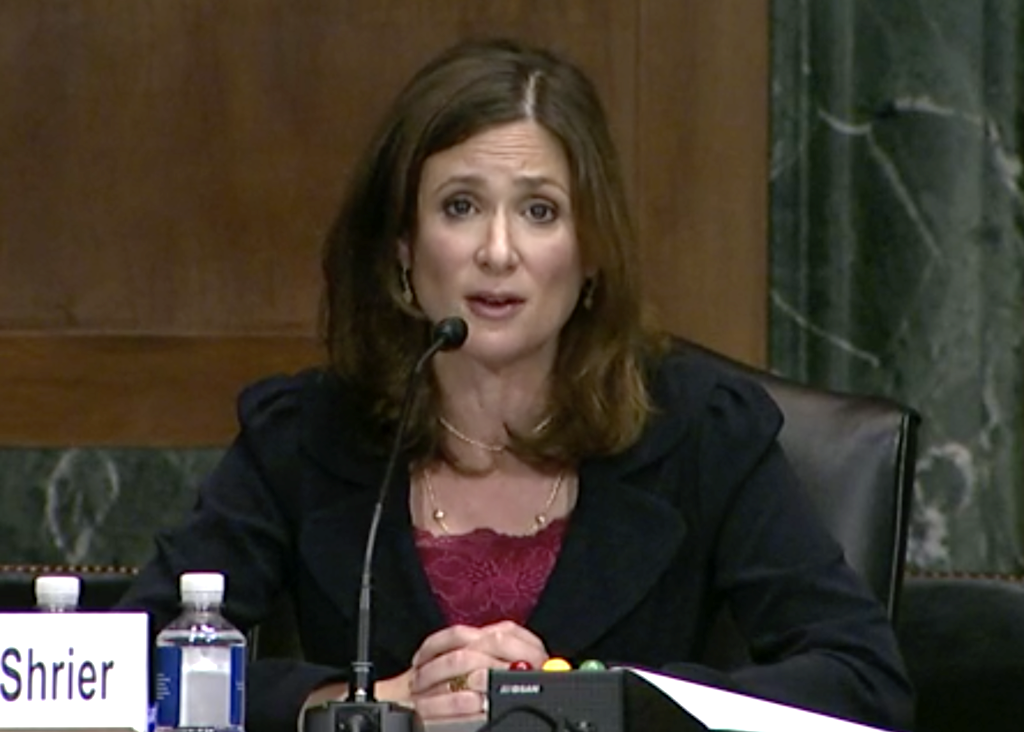 “If S393 merely proposed to extend employment and public housing rights to gay and transgender Americans, I would be supporting this bill instead of testifying against it,” Shrier explained. “I am here today because the bill does much more. And no one who wrote it appears to have thoughtfully considered what it would mean for women and girls.”
Abigail Shrier says she’s likely interviewed more transgender people than anyone in the hearing room.
“Most would never think of stealing women’s scholarships by forcing young women into demoralizing contests with male bodies.”
Not only did Shrier note that the bill would hurt female athletes whose hard work and achievements in sports could be usurped by a biological male who identifies as a woman, but she also raised questions about the risk associated with housing biological males with females in correctional facilities and domestic violence shelters as well as allowing male teachers who say they are female to accompany young girls to the bathroom in schools.
“Does that strike anyone in this room as safe or sensible?” Shrier asked. “The plain truth is that it is not sensible, not safe, and certainly not just to end these hard-won protections for women and girls in the name of equality.”
This legislation, Shrier explained, has “nothing to do with transgender people and everything to do with opportunistic self-identification by violent male felons” who will take advantage of instances such as when the Washington Correctional Center for Women allowed prisoners to live in certain facilities based on their gender identities, resulting in the rape of at least one female.
“If you pass this bill, you can expect hundreds more victims, like this one,” Shrier warned.
Instead of supporting the protections for biological sex outlined in Title IX and established by women such as the late U.S. Supreme Court Justice Ruth Bader Ginsburg, Shrier said congressional proponents and supporters of the Equality Act are “concerned about the progressive groups that will call you a transphobe or a homophobe if you don’t do exactly as they say and abandon women and girls.”
“I have probably interviewed more transgender Americans than any person in this room, and I can honestly say that, excepting political activists, most do not want to obliterate women’s rights and safe spaces,” Shrier said. “Most would never think of stealing women’s scholarships by forcing young women into demoralizing contests with male bodies. But gender ideology, which is at the heart of this bill, is misogyny in progressive clothing. Gender ideology tells women and girls that they are not entitled to their fear or their sense of unfairness as their protective spaces are eliminated.”
Scientists agree that “gender identity can be very ephemeral,” Shrier noted, but if this legislation is passed, it would be “impossible ever to legally distinguish between a woman and a biological male who claims a female identity.”
“In the name of inclusivity, you’ll have made life far less safe, far less fair, and far less inclusive for America’s women and girls,” Shrier concluded. Watch her full opening statement below:
Shrier, author of “Irreversible Damage: The Transgender Craze Seducing Our Daughters,” is an outspoken advocate against the affirmation of gender dysphoria and gender confusion and often critical of life-changing and permanent sex changes imposed on young children.
Last November, Target announced it removed Shrier’s book from its shelves after an unverified Twitter user complained that the book is transphobic because it questions the effects of “irreversible hormonal and surgical experimentation on minors.” While the company quickly restored the book on its online catalog, Target eventually pulled the content again in February without an explanation.
Hey there, @AskTarget: My book, IRREVERSIBLE DAMAGE, is suddenly gone from https://t.co/NRY9T9nAfA, once again, without a word of explanation.
At least have the guts to tell us why.
Jordan Davidson is a staff writer at The Federalist. She graduated from Baylor University where she majored in political science and minored in journalism.
Photo Senate Judiciary Committee/Photo
Abigail Shrier The Equality Act women’s sports