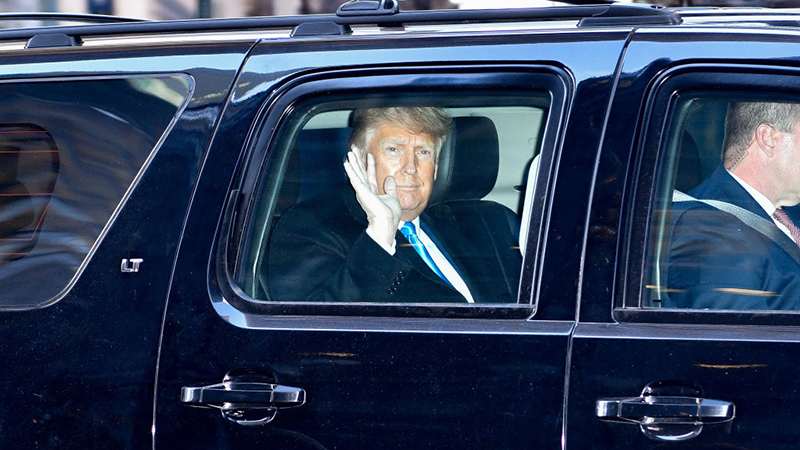 Update 1918ET: Former President Trump has issued a response after the Washington Post admitted to publishing a report falsely accusing him of pressuring a Georgia official to ‘find the fraud,’ – a statement which was debunked by audio of the call, but not before it spread through left-wing MSM echo chambers like wildfire.
Via donaldjtrump.com (emphasis ours)

Fulton County has not been properly audited for vote or signature verification. They only looked at areas of the State where there most likely would be few problems, and even there they found large numbers of mistakes. We are seeking to find and reveal the large-scale election fraud which took place in Georgia. Many residents agree, and their anger caused them not to turn out and vote for two Republican Senators in the January election.

The Consent Decree signed between Raffensperger and Stacey Abrams was not approved by the Georgia State Legislature, and therefore should be deemed invalid, and the election result changed. Why the Governor and Raffensperger ever approved this Consent Decree is one of the great questions? We look forward to an answer.

You will notice that establishment media errors, omissions, mistakes, and outright lies always slant one way—against me and against Republicans. Meanwhile, stories that hurt Democrats or undermine their narratives are buried, ignored, or delayed until they can do the least harm— for example, after an election is over. Look no further than the negative coverage of the vaccine that preceded the election and the overdue celebration of the vaccine once the election had concluded. A strong democracy requires a fair and honest press. This latest media travesty underscores that legacy media outlets should be regarded as political entities — not journalistic enterprises. In any event, I thank the Washington Post for the correction. -Donald J. Trump
Meanwhile, Democrats cited the fake “find the fraud” quote in their impeachment brief.
Glenn, this is the impeachment brief. The fake quote is in it… https://t.co/dCO4saTVAX pic.twitter.com/Wbd8EVVj0q
— Henry Rodgers (@henryrodgersdc) March 15, 2021
The whole world knows the embarrassing truth. Joe Biden is a stooge for the New World Order. A sacrificial lamb, grazing in the dumping ground of the oncoming and inevitable public outrage as a result of the globalist Agenda 2030. This agenda was paused and criticized openly for the past four years. And now it has been restarted with hyper abandon. As the tyranny skyrockets to a new benchmark. And Joe Biden is the perfect compromised puppet to stumble around and take all the blame.
* * *
The Washington Post has issued a massive correction two months after lying ‘misquoting’ former President Donald Trump in a phone call with Frances Watson, chief investigator with the Georgia Secretary of State’s office.
On January 9, the Post reported that Trump told Watson to “find the fraud” he claims happened during the 2020 US election, and that if she did, she’d be a “national hero.”
An actual recording of the call reveals Trump said no such thing.

“Instead, Trump urged the investigator to scrutinize ballots in Fulton County, Ga., asserting she would find “dishonesty” there,” reads the retraction, with Trump adding that she had “the most important job in the country right now.”
BREAKING: Washington Post retracts massive story that falsely claimed Trump asked Georgia to “find the votes” pic.twitter.com/s7omRMWVtn
— Jack Posobiec (@JackPosobiec) March 15, 2021
The Post corrected both the headline and text within the article, and wrote a subsequent report to explain how they received incorrect quotes from an anonymous source in December.
The newspaper’s incorrect quotes were attributed to an anonymous source back in December. Audio of Trump’s phone call with Watson came about after Fulton County District Attorney Fani Willis announced a criminal investigation surrounding the former president’s aim to overturn the 2020 election results.
Because of the criminal investigation, Willis requested that state officials keep documents that may relate to “an investigation into attempts to influence” the 2020 election, The New York Times previously reported. –Daily CallerMeanwhile, CNN jumped on the bandwagon – repeating WaPo‘s lie that Trump wanted Watson to “find the fraud,” citing “a source with knowledge of the call.”
NBC News said it “confirmed The Post’s characterization of the Dec. 23 call through a source familiar with the conversation.”

USA Today claimed a “Georgia official speaking on the condition of anonymity to discuss internal matters confirmed the details of the call …”
— tsar becket adams (@BecketAdams) March 15, 2021
Both WaPo and CNN initially reported that there was unlikely to be a recording of the call. Watson, however, found it in her trash folder according to the Washington Examiner, and was first published by AP on March 11.
BIG: Officials in GA tried to delete evidence that would exonerate Trump from a media lie which led to criminal investigstions against Trump.

And you, morons, think that these guys played in the up and up when it came to counting votes?pic.twitter.com/Q3SSwtbD9K https://t.co/VRGQhTjLdx
— Yossi Gestetner (@YossiGestetner) March 15, 2021
Find the fraud indeed…