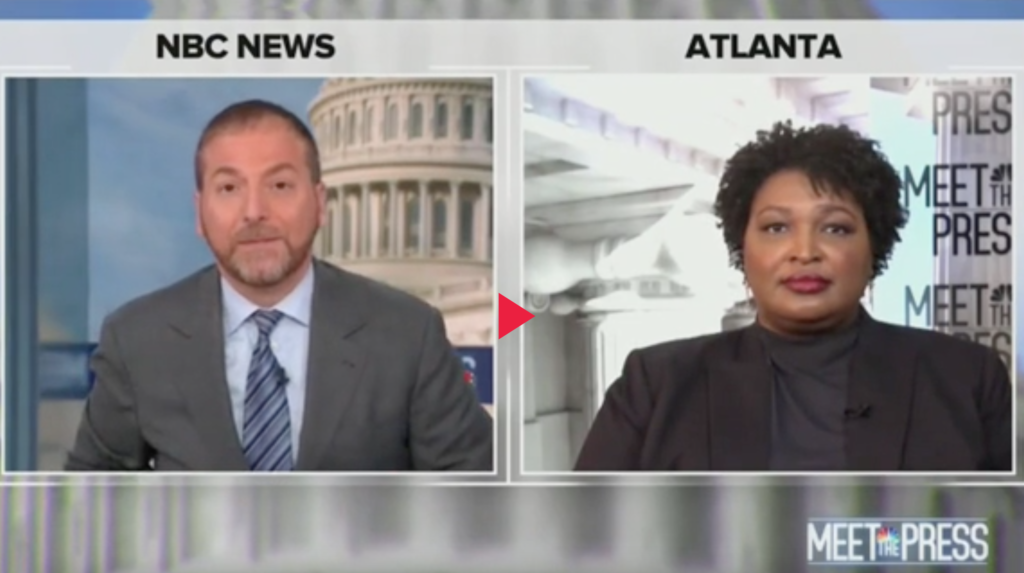 In response, Abrams absurdly accused Republicans in Georgia of proposing legislation as “nothing more than a pretext for returning to Jim Crow, and stopping voters they don’t want to hear from.” Todd offered no pushback on that incredibly reckless accusation.
.@chucktodd asks @staceyabrams how she’ll stop Republicans’ “radical” voter integrity laws, then suggests she should run for governor in 2022. Abrams offers a conspiracy theory in response — that Republicans might cancel elections altogether. pic.twitter.com/oZHUAV4ZJx
When Todd asked Abrams whether she’s considering another run for Georgia governor in 2022, Abrams replied, “My focus is on making sure we have elections in 2022.”
The steamy romance novelist then described Republicans engaged in election integrity efforts on the state level as “domestic enemies” who are “trying to make sure that people of color and young people can’t participate fully in our democracy.” Todd, again, failed to push back on Abrams’s extremely dangerous “domestic enemies” charge.
He also failed to characterize or treat any of Abrams’s statements as radical, even though she accused Republicans of actively plotting to bring back the horrors of Jim Crow, implied there was some possibility Republicans would just cancel elections outright, and described the GOP as “domestic enemies.”
In January, Todd celebrated the feeling of “stability” he experienced after President Biden’s inauguration. It’s clear that denizens of the media bubble value the aesthetic of “stability” more than the reality of it. There is nothing normal or stable about Democrats recklessly accusing their Republican counterparts of being “domestic enemies” eager to revive Jim Crow.
Todd, of course, didn’t even notice. Furthering the destruction of norms people like Todd claim to revere, he—the allegedly unbiased political director of NBC News—let Abrams’s wildly false charges go completely unchallenged.
Emily Jashinsky is culture editor at The Federalist. You can follow her on Twitter @emilyjashinsky .
Chuck Todd corporate media Media media bias Meet the Press Stacey Abrams