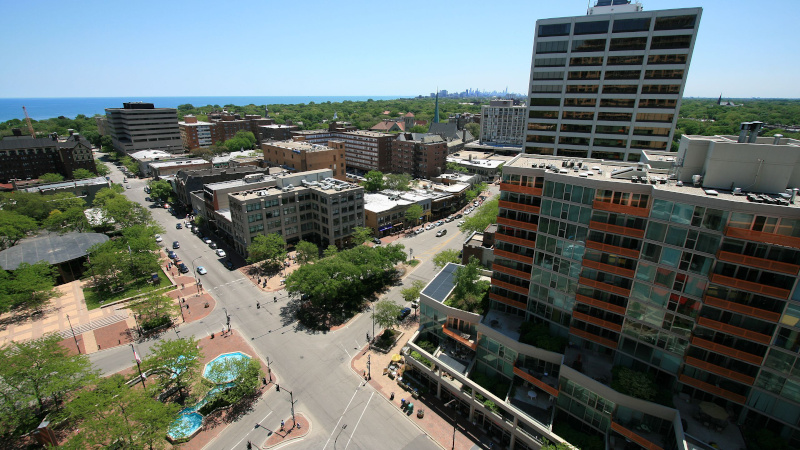 Evanston, Illinois is on the verge of becoming the first city in the United States to financially compensate black residents ‘to address the wealth and opportunity gaps they have experienced because of historical racism and discrimination,’ according to NBC News.
The Chicago suburb voted in 2019 to approve a measure for reparations which uses revenue from a 3% tax collected on the sale of recreational cannabis, community donations, and a city-established reparations fund which pledged to distribute $10 million over 10 years. In effect, people of color buying weed in Evanston are effectively paying reparations.

Since then, Evanston officials have been trying to figure out how to disburse the money – finally deciding that the first $400,000 would be used to address housing needs – giving qualifying residents $25,000 to use towards the purchase of a home, home improvements, and mortgage assistance. To qualify, residents must have either lived in or been a direct descendant of a black person who lived in Evanston between 1919 and 1969 and who suffered housing discrimination due to city ordinances, policies or practices. A vote on the use of funds is expected March 22.
While Evanston passed a fair housing ordinance in 1969, redlining and overt discriminatory housing practices were sharply evident for years afterward.
Real estate brokers developed a practice of informal racial zoning by treating a section of west Evanston as open to African Americans while excluding them from the rest of town, historian Morris “Dino” Robinson, founder and executive director of the Shorefront Legacy Center, told the Evanston Roundtable.
In addition, many Evanston banks refused to lend money to Black people to buy homes on blocks that were not viewed as “acceptable” for them. White homeowners also recorded racially restrictive covenants that provided that their homes “shall not be conveyed, leased to, or occupied by anyone not a Caucasian,” he said. –NBC News“Reparations is the most appropriate legislative response to the historic practices and the contemporary conditions of the Black community. And although many of the anti-Black policies have been outlawed, many remain embedded in policy, including zoning and other government practices,” said alderman Robin Rue Simmons who introduced the legislation. “We are in a time in history where this nation more broadly has not only the will and awareness of why reparations is due, but the heart to advance it.”
If approved, the reparations could kick in as soon as early summer, according to Simmons.

Shockingly, some residents say it isn’t enough – and is a ‘woke-washed’ scheme tantamount to virtue signaling because residents aren’t getting direct checks to spend however they want.
A local group called Evanston Rejects Racist Reparations (ERRR) said in a recent Facebook post that the “current bill proposed by the city of Evanston never went through a racial equality, anti-capitalist process. As a result, historically racist financial institutions like banks, corporations and various individuals, will profit from this proposal. Reparations should not be monetized.”
“We are demanding a name change to the current proposal. The current proposal is inherently anti-Black, and we reject this bill as any form or reparations,” the group continues.
Former mayoral candidate and ERRR organizer, Sebastian Nalls, said that while they don’t oppose the idea of reparations, they do have a problem with Simmons’ program.
“This is not fully in scope and fully beneficial to the Black community,” said Nalls. “Reparations is not just payment towards individuals that have been targeted by inequalities, but it’s also proving the harm that took place will not take place again and ensuring that more harm will not be caused.”
“We need to change the name of the current program, because just having a housing program is not reparations,” Nalls continued, adding that reparations should be in the form of direct payments so that people can spend it themselves as opposed to using it for housing.
Simmons hit back, saying that the process has been ‘fair, inclusive and methodical,’ according to NBC News.
“It certainly is reparation. It is redress. It is compensation for recovery of wealth loss due to housing policies specifically,” she said, adding: “We’re doing what we can within our purview as a municipal government.”
“We don’t govern the banking industry. We do advocate that the banking industry does more to improve their practices and create fair products, but we thought it appropriate that we take the first tangible step as a city within our purview.”
In short, reparations are expensive.
According to Ron Daniels, organizer with the National African American Reparations Commission says the housing assistance counts.
“This is reparations,” he said. “The city of Evanston is in the process of making repairs for this special category of harm, but moving forward, I’m sure that the City Council and key people in the community will be looking for opportunities for these new voices who have legitimate interests and legitimate concerns to become involved in the process looking at the next round of reparation proposals.”
The radical left is now openly promoting eugenics.
Share