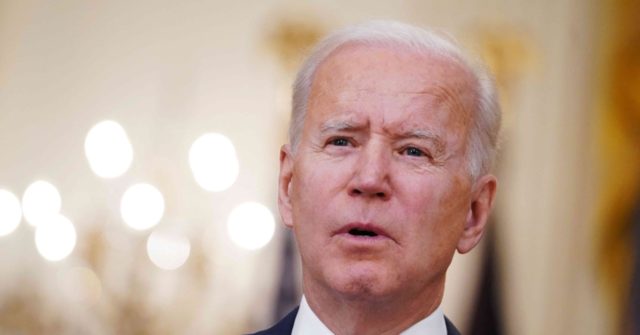 Pollak: ‘Equity’ and ‘Equality’ Clash in Joe Biden’s Executive Orders
2 Mandel Ngan / AFP / Getty
Joel B. Pollak
9 Mar 2021
President Joe Biden signed two executive orders on International Women’s Day. One opposed gender discrimination in education; the other established a “White House Gender Policy Council.”
The latter promised to achieve both “gender equity and equality.” That might seem redundant, as the two terms are sometimes used interchangeably, but here they have distinct meanings.
Biden’s executive order, recognizing the potential for confusion, provided a definition of “equity”:
The term “equity” means the consistent and systematic fair, just, and impartial treatment of all individuals, including individuals who belong to underserved communities that have been denied such treatment, such as women and girls; Black, Latino, and Indigenous and Native American persons, Asian Americans and Pacific Islanders, and other persons of color; members of religious minorities; lesbian, gay, bisexual, transgender, and queer (LGBTQ+) persons; persons with disabilities; persons who live in rural areas; and persons otherwise adversely affected by persistent poverty or inequality.
Biden did not bother to define “equality.” The classic definition, however, implies equal treatment under the law — or, in the Judeo-Christian tradition, that the law must be “no respecter of persons” (Acts 10:34); that “thou shalt not respect the person of the poor, nor honour the person of the mighty: but in righteousness shalt thou judge thy neighbour.” (Leviticus 19:15)
The definition of “equity” is only partially consistent with “equality.” Equality, too, is “fair, just, and impartial,” but the definition of “equity” demands specifically that those “who belong to underserved communities” and “adversely affected by persisted poverty or inequality” be recognized as such.
In other words, “equity” demands that the law be a “respecter of persons,” treating people differently based on whether they belong to groups that have historically suffered in some way.
Note, too, that “equity” replaces the individual as the unit to which “fairness,” “justice,” and “impartiality” apply. It is the community that is said to be suffering, whether individuals within that community are, or not.
Moreover, the definition of “equity” expands the timeframe to which redress applies: it looks beyond present suffering to includes suffering in the distant past. “Equity” can therefore benefit individuals who have never personally suffered — at the expense of those who have never benefited.
Finally, the term “equity” applies in what is described as a “systematic” way. That, too, might seem redundant: equality before the law is a universal principle; it is the “system.”
But the term “systematic” — like its cousin, “systemic racism” — implies the world beyond the law. “Systematic” includes everything — the economy, social mores, language, education, and art. While “equality” applies to government itself, “equity” is a principle without boundaries.
Some Democrats have tried to reconcile the two.
In his confirmation hearing last month, Attorney General nominee Merrick Garland, referring to Biden’s executive order on “racial equity” — which did not mention “equality” — said “equity” meant “a fair and impartial treatment of every person without regard to their status, and including individuals who are in underserved communities, where they were not accorded that before.”
So “equity” is supposed to ignore status — and yet status is crucial.
There is some overlap between “equity” and “equality”: the civil rights movement, for example, involved extending equality to those who had been denied it by racist, unjust laws.
Yet once formal, legal equality is universal, “equity” not only goes beyond mere “equality,” but arguably undermines it.
A policy that favors some individuals over others, solely on the basis of their apparent membership in groups that claim to have suffered in the past, can never be “fair, just, and impartial,” as equality requires.
Joel B. Pollak is Senior Editor-at-Large at Breitbart News and the host of Breitbart News Sunday on Sirius XM Patriot on Sunday evenings from 7 p.m. to 10 p.m. ET (4 p.m. to 7 p.m. PT). He is the author of the recent e-book, Neither Free nor Fair: The 2020 U.S. Presidential Election. His recent book, RED NOVEMBER, tells the story of the 2020 Democratic presidential primary from a conservative perspective. He is a winner of the 2018 Robert Novak Journalism Alumni Fellowship. Follow him on Twitter at @joelpollak.
PoliticsequalityEquitygender equalityJoe Biden
.