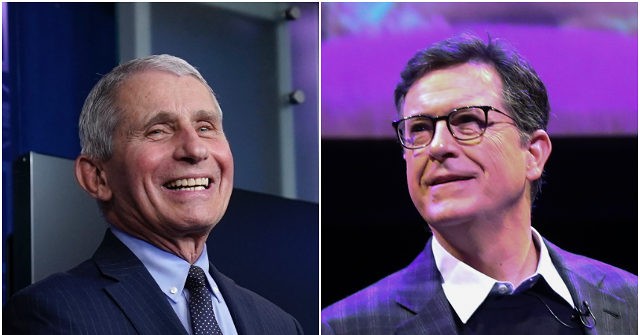 Dr. Fauci Joining Stephen Colbert to Mark One Year of Coronavirus Pandemic
2 AP Photo/Alex Brandon/Bennett Raglin/Getty Images for Montclair Film
David Ng
9 Mar 2021
Dr. Anthony Fauci is scheduled to appear Friday on a special episode of CBS’s The Late Show with Stephen Colbert to observe the one year mark since the start of the coronavirus pandemic.
CBS said the Stephen Colbert episode with Fauci will take a look “back at a year in quarantine” and observe the one-year anniversary of the show’s last taping from the Ed Sullivan Theater in New York.
The network said the episode will also mark Fauci’s first time on The Late Show. The director of the National Institute of Allergy and Infectious Diseases has become a media darling since the outbreak of the coronavirus, appearing on magazine spreads and even starring in his own forthcoming Nat Geo documentary Fauci, which praises him as a “hero.”
But few media outlets have pointed out Fauci’s flip-flopping stances, especially when it comes to mask wearing. As Breitbart News reported, Monday marked the one-year anniversary of Fauci’s appearance on CBS’ 60 Minutes during which the physician discouraged people from wearing masks.
“Right now in the United States, people should not be walking around with masks,” he said on the show. “There’s no reason to be walking around with a mask.”
Fauci advocated in January for double masking only to backtrack a few weeks later, saying “there’s no data that indicates that that is going to make a difference.”
Fauci has so far been silent on the Biden administration’s decision to allow migrants who have tested positive for the coronavirus to enter the country and move around freely.
As Breitbart News reported, Fauci declared last week that he doubts the country will be back to normal by this time next year. “I don’t think we’re going to be completely normal a year from now,” he said.
Follow David Ng on Twitter @HeyItsDavidNg. Have a tip? Contact me at dng@breitbart.com
EntertainmentHealthPoliticsAnthony FauciCBScoronavirusDr. FauciLate Show with Stephen ColbertStephen Colbert
.