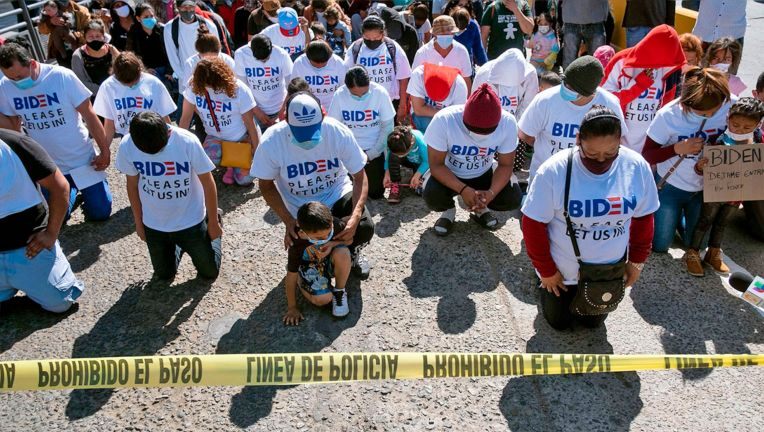 New numbers, reported by CNN, reveal the biblical scale of the Biden-induced mass migration headed to the U.S. border, with a reported 100,000+ arrests and apprehensions in the past four weeks.
The numbers mark the highest levels in half a decade.
The news comes as the Biden regime maintains there is no crisis on the southern border, while the President and his officials have been encouraging massive movements of people. Many arriving at the border are even wearing “Biden” branded t-shirts.
CNN reports:
The surge in migrants adds to a growing sense of emergency for the Biden administration which has been seeking to unwind the Trump administration’s immigration policies over that time.
“February was unprecedented compared to the last five years,” a Homeland Security official told CNN. Single adults make up the biggest portion of apprehensions, but the percentage of families and children jumped last month, according to the official.
Since last April, Customs and Border Protection has seen an increase in border encounters from the Western Hemisphere due to worsening economic conditions brought on by the pandemic and natural disasters in the region, according to the border agency.
Read the rest of the story here.
0
0
Do you believe the “official” version of events on Jan 6th? *YesNoNot SureYour e-mail is required to confirm your vote. This is to stop spammers. If you use a fake email, your vote won’t be counted.
Email *
Submit