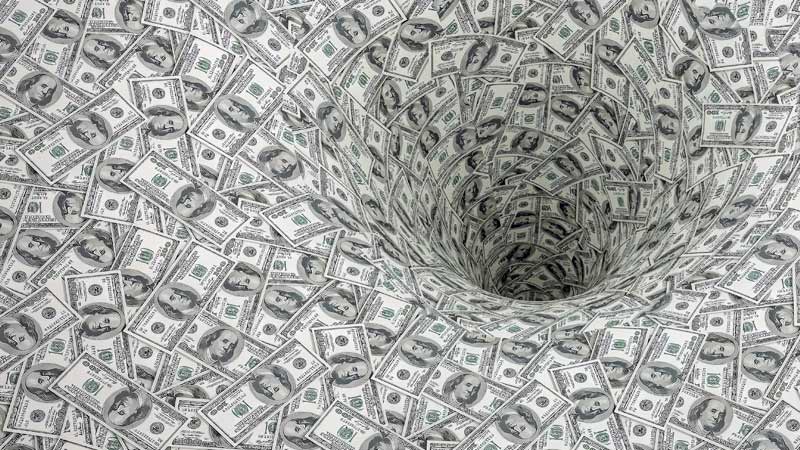 Savings deposits were previously considered nontransaction accounts, because some (but not all) types of withdrawals and transfers of funds were restricted to six per statement cycle. But in December 2020, the Fed announced that, pursuant to the changes in Regulation D announced in April 2020, this limit would be permanently abolished on February 23, 2021. Thus savings accounts are now combined with other checkable deposits into a new category of M1, “other liquid deposits.”
As you can see in the graph below, the reclassifying of savings deposits as transaction accounts caused a retroactive tripling in the quantity of M1, from $4.898 trillion on April 27, 2020, to $15.994 trillion on May 4, 2020. This surge in M1 was merely the outcome of an accounting operation and, therefore, did not affect the Fed’s broader monetary aggregate, M2. Existing savings deposits were simply shifted from nontransactions to transactions deposits, both of which are included in M2 (not shown on the chart).

Ironically, this revision in M1 brings it much closer to the “True Money Supply,” or TMS, the Austrian definition of the money supply developed by Murray Rothbard and the present author in the mid-1980s. TMS includes savings deposits, along with demand and other checkable deposits, while excluding small-time deposits and MMMFs. Rothbard and I recognized that savings deposits were “transaction accounts,” that is, immediately spendable dollars, because they were interchangeable dollar for dollar on demand for either cash or demand deposits.
Even under the unrevised Regulation D, the limitation on withdrawals and transfers did not apply to all withdrawals. Withdrawals made through a bank teller and, later, from ATMs were always unlimited. Furthermore, some banks linked checking and savings accounts and permitted ATM transfers between the two accounts with a debit or ATM card. So M1 is now a much better reflection of the actual money stock in existence. This is the good news.
Now the only remaining differences between M1 and TMS are US government deposits and time and savings deposits due to foreign banks and official institutions, both previously relatively minor items included in TMS but oddly excluded from M1 and all broader Fed measures of the money stock. The exclusion of, for example, US government deposits from official monetary aggregates never made any sense, because they are used to facilitate federal tax receipts and spending in the same way as state and municipal deposits, which are included in the money supply.
Nevertheless, despite its reluctance to include them in its official money stock measures, the Fed duly reports these deposit series as “memorandum items” in its H.6 Release, Money Stock Measures—or at least it did until February 23, 2021, when both series were abruptly discontinued. And herein lies the bad news: buried deep in the Technical Q&As addendum to the Fed’s December 17 H.6

Release announcing the reclassification of savings deposits and concomitant revision in M1 is an “answer” indicating that “several memorandum items on US government deposits and deposits due to foreign banks and foreign official institutions will be discontinued.” No explanation is given for this change, but the prospective inquirer is directed to “other sources” where “data on these release items are available.” These other sources mainly refer to FFIEC (Federal Financial Institutions Examination Council) schedule RC-E, which is an obscure report available only on a quarterly basis, whereas the Fed had been providing updates of the series on a weekly basis.The key question—for which no answer is provided—is why.
Why has the Fed suddenly and without explanation become less transparent in providing information about vital monetary data? Perhaps the answer is related to the fact that, over the past year, both US government deposits and savings and time deposits due to foreign banks and official institutions have sharply spiked.
The graph below indicates that from December 30, 2019, to February 1, 2021, US government deposits have more than quadrupled from $373 billion to $1.626 trillion.
As can be seen from the chart below, the latter figure is more than two and a half times the previous historical high of $604 billion, reached during the financial crisis in November 2008.

In the case of time and savings deposits due to foreign banks and official institutions, as the chart below shows, the spike has not been nearly as sharp but has still been significant. These deposits have increased from $62.2 billion to $91.9 billion, or by almost 50 percent, between April 2019 and October 2020.

In a post in November 2020, two mainstream monetary economists unwittingly hinted at the reason why the Fed may have decided a month later to suppress its US government deposits series.
Noting “the explosion of the Treasury’s account at the Fed,” they pointed out, “it fuels perceptions of monetary finance, or even helicopter money [and] suggestions that the Fed is directly financing the government foster uncertainty about central bank independence.” Under such modern monetary theory (MMT) policies, the Fed would directly lend newly created money to the Treasury, which would, of course, be instantly revealed in a spectacular increase of Treasury deposits held at the Fed and commercial banks.
I suggest that the Fed needs to add one more question (and a truthful answer) to its Technical Q&As about its latest revisions to its money stock measures:
“Is the discontinuation of the US Government Deposits series the first step by the Federal Reserve in gearing up to implement helicopter money in the expectation that Congress will emend the Federal Reserve Act, which prohibits the Fed from lending money directly to the US Treasury?”
Share