Joe Biden Forgets His Mask Again at the White House 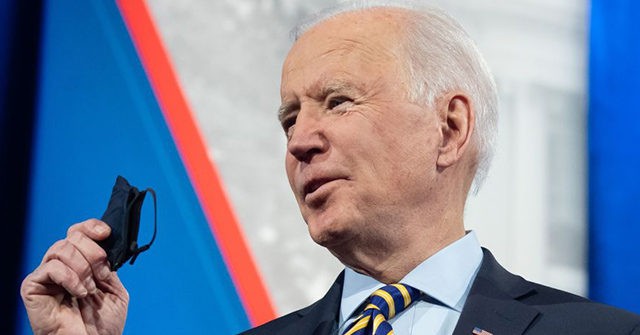 Joe Biden Forgets His Mask Again at the White House
125
The White House
Charlie Spiering
8 Mar 2021
President Joe Biden again walked away from a podium without his mask, forgetting to put it back on after making remarks at the White House on Monday.
The incident occurred during a speech marking International Women’s Day, with Biden announcing the nominations of two women General Officers for positions as 4-star Combatant Commanders — Air Force Gen. Jacqueline Van Ovost and Army Lt. Gen. Laura Richardson.
Biden entered the room wearing his mask as he approached the podium for his speech and removed it in front of the cameras.
“We need little girls and boys both, who have grown up dreaming of serving for the country know this is what generals in the United States armed forces look like; this is what Vice President’s of the United States look like,” Biden said, promoting the nomination of the two women as a monumental step for women in the military.
The president spoke for about ten minutes at the event but left the podium without his mask.
After the speech, Biden spoke to Vice President Kamala Harris who backed away from him to maintain social distancing as he approached. He also spoke briefly to Jacqueline Van Ovost before exiting the room with his team, all of them wearing masks.
Harris did not remind the president that he forgot his mask, as she did at an event in February.
Biden also lost his mask at an event in December 2020, walking back to the podium to retrieve it.
The president has repeatedly urged Americans to wear a mask to help stop the spread of the coronavirus.
From rolling out the Johnson & Johnson vaccine to securing enough doses for every American by the end of May — last week was a big week, but we still have further to go. Please keep wearing masks, stay socially distanced, and get vaccinated when it’s your turn.
— President Biden (@POTUS) March 8, 2021
HealthPoliticsScienceJoe BidenKamala HarrismaskWhite House
.