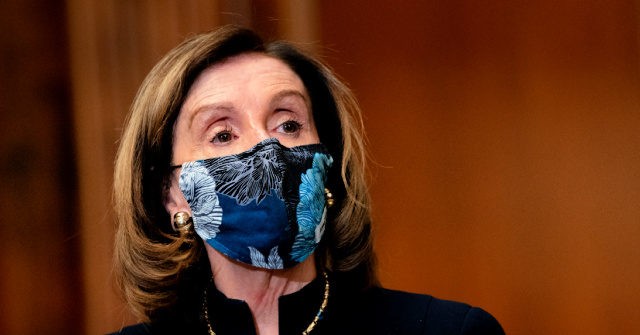 Pollak: Nancy Pelosi Is the Big Winner in $1.9 Trillion ‘COVID Relief’ Bill
22 Stefani Reynolds/Getty Images
Joel B. Pollak
7 Mar 2021
President Joe Biden hailed the Senate passage of his $1.9 trillion coronavirus relief bill on Saturday, clearing the way for the legislation to reach his desk. He claimed it was necessary to fight the pandemic, and to revive the ailing economy.
Neither of those claims stands up to close scrutiny. Vaccines are rolling out, thanks to former President Trump’s Operation Warp Speed, and the economy is already recovering, thanks to Trump’s policies and the refusal of Republican-governed states to shut down.
The new COVID relief package could help, with more money for the fight against the pandemic, and more relief for ailing families. But it could also hurt, by overheating the economy in a way that causes inflation to rise and forces the Federal Reserve to raise interest rates. That, in turn, will damage growth and job creation.
The truth is that much of the $1.9 trillion package is intended to reward Democrat-governed states and left-wing interest groups. As with the 2009 “stimulus,” the first priority of a New Democratic administration is to reward the forces that put it into office, arming them for the next fight.
The Biden administration will, no doubt, claim credit for any economic good news that happens after the bill’s passage — invoking the classic “post hoc, ergo propter hoc” fallacy. And Republicans will be cast as villains for opposing it — when the truth is that Republicans tried to negotiate a more targeted bill. Biden refused to compromise with them; so much for so-called “unity.”
The real winner, politically, is Speaker of the House Nancy Pelosi (D-CA). She delayed a deal on coronavirus relief for months, then agreed to a much smaller deal in December. Asked by reporters about her “mistake,” Pelosi all but admitted that it had been worth causing pain to Americans to prevent Trump from accomplishing anything before the election.
All Pelosi had to do was wait for a new Senate, and a new administration. She got her money — even if Americans had to suffer for it.
Joel B. Pollak is Senior Editor-at-Large at Breitbart News and the host of Breitbart News Sunday on Sirius XM Patriot on Sunday evenings from 7 p.m. to 10 p.m. ET (4 p.m. to 7 p.m. PT). His newest e-book is How Not to Be a Sh!thole Country: Lessons from South Africa. His recent book, RED NOVEMBER, tells the story of the 2020 Democratic presidential primary from a conservative perspective. He is a winner of the 2018 Robert Novak Journalism Alumni Fellowship. Follow him on Twitter at @joelpollak.
EconomyHealthPoliticscoronavirusCOVID-19Nancy Pelosistimulus
.