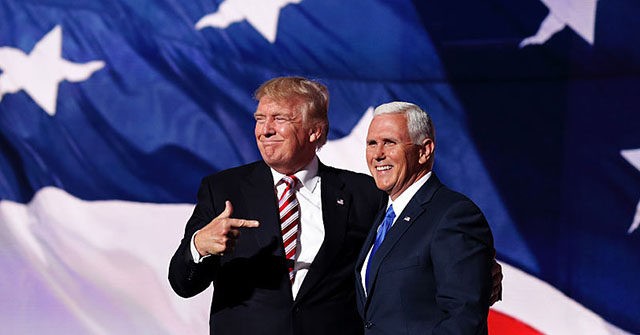 Trump Adviser Jason Miller: Trump Not Considering Replacing Pence on Potential 2024 Ticket
15 Chip Somodevilla/Getty Images
Joshua Caplan
5 Mar 2021
Trump adviser Jason Miller says the former president is not weighing replacing Vice President Mike Pence if he seeks the White House in 2024.
In an interview with Mediaite’s The Interview podcast, Miller addressed a Bloomberg News report alleging that Trump is thinking about dumping Pence if he seeks a re-match against President Joe Biden.
“I wonder who was pushing this story? Could it maybe be the supporters of Governor Noem?” Miller asked, before clarifying that he was not attempting to “take anything away” from the South Dakota governor, who has seen her political star rise for taking an anti-lockdown approach during the coronavirus pandemic.
“I can tell you, as someone who probably speaks with him on the political side as much, if not more than anybody else, never once has there been a conversation internally or in a group about doing something different for the VP position for 2024 if he decides to go that route,” Miller added. “President Trump and Vice President Pence have had a couple of really good conversations since President Trump left office.”
Trump and Pence without speaking for a brief period after the former president demanded that the former vice president act against certifying the 2020 election during Congress’s election certification process.
Ahead of the certification, Pence revealed in a letter that he did not believe he had Constitutional authority to overturn the electoral votes.
Days following the January 6th Capitol Hill riot, Trump and Pence met Monday to discuss attack and various key issues, administration sources told Breitbart News.
“I realize that some Trump supporters might be a little bit frustrated with the former vice president,” said Miller. “He’s a great guy. He’s been a loyal ally, loyal teammate. And I think President Trump still has pretty high regard and fondness for Vice President Pence.
Politics2024Donald TrumpJason MillerMike Pence
.