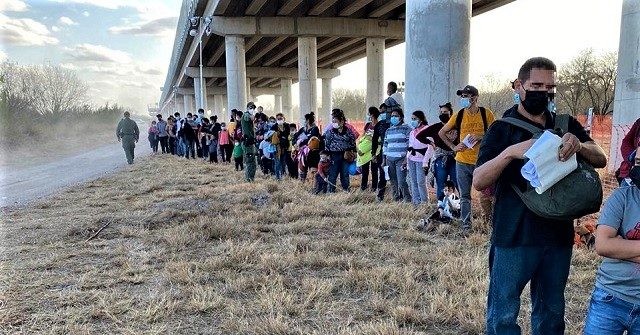 REPORT: 100K Migrants Apprehended at U.S.-Mexico Border in February
25 Photo: U.S. Border Patrol/Rio Grande Valley Sector
Bob Price
6 Mar 2021
Border Patrol agents apprehended nearly 100,000 migrants along the U.S.-Mexico border in February, according to information leaked to Reuters by federal officials. This represents the largest number of migrant apprehensions in February since 2006.
Reuters published previously unreported numbers showing that Border Patrol agents apprehended nearly 100,000 migrants in February. If the numbers are accurate, they represent an increase of nearly 33 percent from January. Officials expect the official numbers to be released next week.
The rapidly increasing number of apprehensions follows the abandonment of Trump-era border security and immigration control policies by President Joe Biden during his first days in office.
House Minority Leader Kevin McCarthy (R-CA) sent a letter to President Biden on Friday requesting a meeting to discuss “great concerns” with the administration’s approach to the border, Reuters reported.
“We must acknowledge the border crisis, develop a plan, and, in no uncertain terms, strongly discourage individuals from Mexico and Central America from ever making the dangerous journey to our southern border,” McCarthy wrote.
The number of apprehensions of migrants continues to increase in March with officials acknowledging the arrest of more than 4,500 migrants on Wednesday, the article continues.
On Thursday, U.S. Representative Henry Cuellar (D-TX) reported the apprehension of approximately 10,000 migrants in the Rio Grande Valley Sector during a seven-day period — 2,500 in the previous two days.
“We are weeks, maybe even days, away from a crisis on the southern border. Inaction is simply not an option,” Congressman Cuellar said in a written statement. “Our country is currently unprepared to handle a surge in migrants in the middle of the pandemic.”
Of particular concern is the growing number of unaccompanied minors being apprehended at the border. The massively increasing number led to the Biden administration holding minors in Border Patrol facilities beyond the 72-hour legal limit.
Democrat leaders in South Texas are also critical of the president’s policies that are forcing the release of migrants infected with COVID-19. Officials in Brownsville, Texas, report more than six percent of migrants being released at a local bus station are testing positive for COVID-19.
Texas State Senator Jose “Chuy” Hinojosa (D-McAllen) also complained about the migrants being released without being tested, Breitbart Texas reported in February. “[Border Patrol agents] were just dropping them off at the bus station without testing them. Obviously, that’s very alarming to all of us in that they’re coming from Central America and through Mexico and to be released into the United States without being tested for COVID is really unconscionable,” the Democrat state senator said.
Bob Price serves as associate editor and senior news contributor for the Breitbart Texas-Border team. He is an original member of the Breitbart Texas team. Price is a regular panelist on Fox 26 Houston’s Sunday-morning talk show, What’s Your Point? Follow him on Twitter @BobPriceBBTX, Parler @BobPrice, and Facebook.
Border / Cartel ChroniclesImmigrationPre-ViralBiden AdministrationJoe BidenMigrant ApprehensionsU.S. Border PatrolU.S. Customs and Border Protectionunaccompanied alien childrenUnaccompanied Minors
.