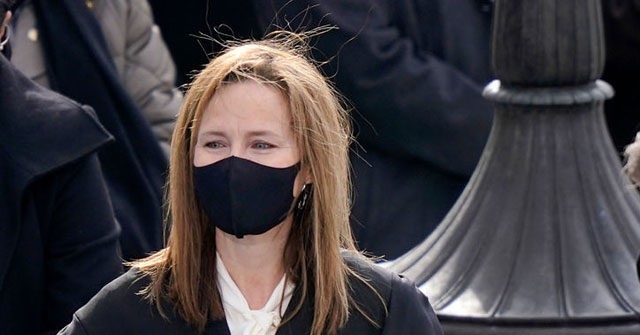 Barrett’s First SCOTUS Majority: Some Federal Documents Protected from FOIA
Drew Angerer/Getty Images
Penny Starr
6 Mar 2021
Justice Amy Coney Barrett issued her first majority opinion for the United States Supreme Court on Thursday, ruling that while the Freedom of Information Act (FOIA) allows outside groups to request documents, those documents that are part of the planning process and not final policy are protected.
The case was the first Barrett heard after former President Donald Trump nominated her to replace liberal Justice Ruth Bader Ginsburg.
The 7-to-2 opinion said the U.S. Fish and Wildlife Service and the National Marines Fisheries Service did not have to give the Sierra Club documents of communications with the Environmental Protection Agency (EPA) about shaping power plant policy.
The case, U.S. Fish and Wildlife Service v. Sierra Club, surrounds the Sierra Club filing a FOIA request for “draft biological opinions” in 2013. The opinions focused on threats to endangered species from power plant operations.
“Because the decision makers neither approved the drafts nor sent them to the EPA, they are best described not as draft biological opinions but as drafts of draft biological opinions,” Barrett wrote. “While the drafts may have had the practical effect of provoking EPA to revise its rule, the privilege applies because the Services did not treat the drafts as final.
The remaining conservative judges joined Barrett’s opinion, as did liberal Justice Elena Kagan. Liberal Justices Stephen Breyer and Sonia Sotomayor dissented.
In his dissent, Breyer wrote it is reasonable to believe that “draft” opinions were documents that played a role in deciding whether the EPA proceeds with a rule.
The High Court remanded the case to the lower court to see if any part of these documents can be segregated from the deliberative part, and thus disclosable under FOIA. But if the documents are confidential that would not make them disclosable.
The case is U.S. Fish and Wildlife Service v. Sierra Club, No. 19–547 in the Supreme Court of the United States.
Follow Penny Starr on Twitter or send news tips to pstarr@breitbart.com.
EnvironmentPoliticsAmy Coney BarrettEnvironmental Protection AgencyFOIApower plantsSierra ClubSupreme CourtU.S. Fish and Wildlife Service
.