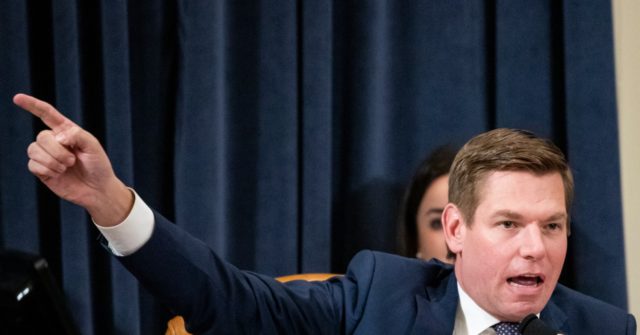 Eric Swalwell Sues Donald Trump and Allies over Capital Riots
13,165 Samuel Corum – Pool/Getty
Simon Kent
5 Mar 2021
Ex-House impeachment manager Eric Swalwell (D-CA) confirmed Friday he will sue former President Donald Trump, his son Donald Trump Jr., Rudy Giuliani and Republican Rep. Mo Brooks in a second major lawsuit seeking to hold Trump and his allies accountable for the attack on the U.S. Capitol on January 6.
Swalwell’s action follows a similar suit filed last month by Rep. Bennie Thompson against Trump, Giuliani and the Oath Keepers and Proud Boys groups.
Today, I filed a civil claim against Donald Trump, Donald Trump Jr., Rudolph Giuliani, and Rep. Mo Brooks for inciting an attack against the Capitol that terrorized lawmakers and prevented us from certifying the votes of the American people.
My statement: pic.twitter.com/wmSMcEzeL6
— Rep. Eric Swalwell (@RepSwalwell) March 5, 2021
Swalwell’s case echoes some of the same claims as Thompson’s — citing a civil rights law meant to counter the Ku Klux Klan’s intimidation of elected officials.
According to Axios, the lawsuit — filed in the U.S. District Court in Washington, D.C., by the law firm KaiserDillon PLLC — accuses Trump and his allies of conspiring to violate the civil rights of the defendants.

“As a direct and foreseeable consequence of the Defendants’ false and incendiary allegations of fraud and theft, and in direct response to the Defendants’ express calls for violence at the rally, a violent mob attacked the U.S. Capitol, ” the complaint alleges.
Swalwell alleges the defendants, “by force, intimidation, or threat, agreed and conspired with one another to undertake a course of action to prevent” Joe Biden from being certified as the election winner and holding office.
Trump and Brooks are being sued in their “personal capacity.” The lawsuit seeks unspecified monetary damages and a requirement the defendants provide written notice seven days in advance of a rally or public event hosted on an election day.
CNN reports the new lawsuit and Thompson’s claims are likely to go hand-in-hand in D.C.’s federal trial court, potentially even before the same judge, Amit Mehta, who was appointed by Barack Obama.
Swalwell was one of the impeachment managers who attempted to persuade the U.S. Senate to block Trump from holding the office of president again, saying Trump incited the violence.
Eric Swalwell declares that he doesn’t “think we can afford to wait” to impeach President Donald Trump and must do so “as soon as possible.” https://t.co/cEqAeGjHJB
— Breitbart News (@BreitbartNews) January 11, 2021
The Senate, though, voted to acquit Trump.
Swalwell has previously said Trump had “radicalized” his supporters the same way the late terrorist leader Osama bin Laden had, as Breitbart News reported.
Follow Simon Kent on Twitter: Follow @SunSimonKent or e-mail to: skent@breitbart.com