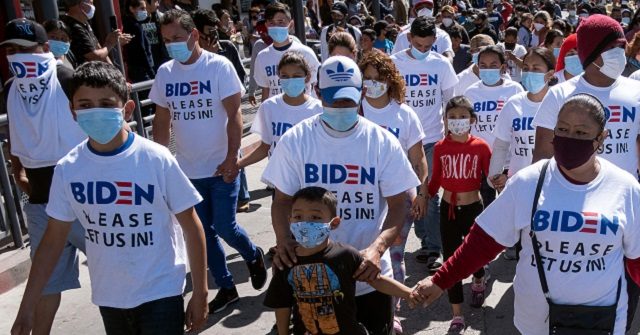 REPORT: Biden Transforming ICE Detention Facilities into ‘Rapid-Processing’ Centers
34 Photo by GUILLERMO ARIAS/AFP via Getty Images
Bob Price
4 Mar 2021
The Biden Administration is turning ICE long-term detention facilities for migrant families into rapid-processing reception and release centers. The re-designated hubs will move migrant families more quickly from the border region into the U.S. interior.
ICE officials told immigration advocates and relief organizations they are ending long-term detention of migrant families, the San Antonio Express-News reported last week. The facilities will be “rebranded” as “reception centers,” the ICE officials stated.
The plan by Biden officials is to convert the long-term family detention centers in South Texas into “Ellis Island-style rapid-processing hubs” with a stated goal of releasing migrant families into the U.S. interior within 72 hours, the Washington Post revealed.
Russel Holt, a senior ICE official told staff members in an email reported by the Post that unaccompanied minors and families this year “are expected to be the highest numbers observed in over 20 years.”
Holt acknowledged that even with this aggressive catch and release program, ICE facilities still may not be able to keep up with the flow of migrant families and unaccompanied minors. He said hotels will be utilized if processing hubs are filled beyond capacity.
Due to policy changes put in place by President Joe Biden, the surge of migrant families and unaccompanied minors continues to grow at an uncontrollable rate.
“We’re apprehending more kids than we can release,” a senior Homeland Security official told CNN.
A Department of Health and Human Services (HHS) official added, “We’re not keeping up.”
In January, the apprehension of Unaccompanied Alien Children also jumped in all nine southwest border sectors, Breitbart Texas reported. The Del Rio and Big Bend Sectors witnessed triple-digit percentage increases. More significantly, the Rio Grande Valley sector, the nation’s busiest sector, jumped from 4,215 unaccompanied children to 7,295 — an increase of 73 percent.
CNN reports that on Tuesday alone, Border Patrol facilities held more than 1,300 children while waiting for transfer to HHS officials. This was up by 300 from Monday.
Many of these minors are being held beyond the 72-hour limit imposed by a court in the Flores Settlement Agreement.
The CNN article confirms an exclusive report from Breitbart Texas’ Randy Clark on March 2 discussing the overcrowding of Border Patrol and Health and Human Services facilities who are unable to keep up with the growing numbers of migrant children.
Clark wrote:
Despite efforts by the Border Patrol to transfer the UAC’s into suitable Health and Human Services (HHS) shelters, the minors are not being accepted by HHS in a timely manner — running contrary to current legal requirements. Delays in the transfer of the migrant children in many cases exceed the legal limit of 72 hours.
Bob Price serves as associate editor and senior news contributor for the Breitbart Texas-Border team. He is an original member of the Breitbart Texas team. Price is a regular panelist on Fox 26 Houston’s Sunday-morning talk show, What’s Your Point? Follow him on Twitter @BobPriceBBTX, Parler @BobPrice, and Facebook.
Border / Cartel ChroniclesImmigrationPoliticsBiden AdministrationBorder CrisisDepartment of Health and Human Servicesfamily detentionU.S. Border PatrolU.S. Immigration and Customs EnforcementUnaccompanied Minors
.