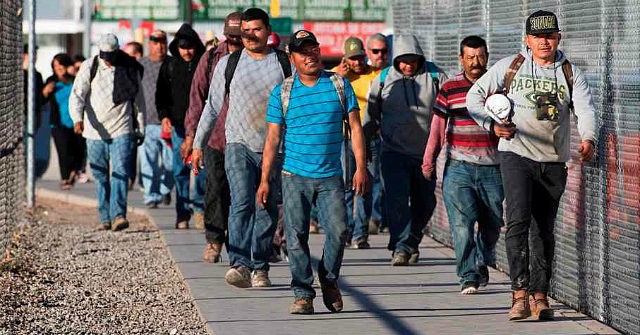 Politico: ‘Dismal’ Democratic Support for Joe Biden’s Giant Amnesty
12 JIM WATSON/AFP via Getty Images
Neil Munro
4 Mar 2021
Democrats have postponed a floor vote on President Joe Biden’s massive amnesty and population-expansion bill because of “dismal” support among Democrats, according to Politico.
Instead of a March vote, Democrats say their huge bill will be sent through the committees while supporters try to build support in time for an April vote, according to Politico, which added:
Proponents of the Biden bill, meanwhile, are still furiously working the phones to get their colleagues on board. That group, led by California Reps. Linda Sánchez, Judy Chu and Zoe Lofgren, has also lined up meetings with influential groups across the caucus, including the Blue Dogs on Tuesday and progressives on Thursday. Sánchez and Lofgren, along with other top Democrats, also spoke to the New Democrat Coalition late last month.
Democrats in swing districts are looking to make some changes to the bill, Politico reported. One token change in favor of the E-Verify employment system was suggested by Rep. Tom Malinowski (D-NJ):
“Yes, I support what’s in the bill. I think we would be in a stronger position to get it enacted if we eventually ended up where, I think, the middle ground is,” Malinowski said. “I think for both solid political, practical reasons and moral reasons, those two things should go together.”
In the meantime, Democrats will try to pass two other major amnesty bills as soon as next week.
One bill would amnesty more than two million migrants brought to the United States as children. Some GOP members are expected to support the bill.
The second bill would amnesty one million illegal migrants who were hired by the U.S. agriculture sector. The bill would also allow farm companies to import many more cheap temporary workers that would sideline local Americans, reduce corporate spending on high-tech labor-saving machines, and shrink payrolls and tax receipts in many rural towns. The agriculture sector amnesty may win support from more than 20 Republicans.
Biden’s bigger bill would amnesty at least 11 million people and then deliver roughly 24 million additional people to Americans’ national labor market, their housing markets, schools, and colleges.
The huge population expansion would force up real estate prices and rents and push many blue-collar Americans out of expensive cities.
The bill would also sideline American graduates by allowing Fortune 500 companies to hire an unlimited number of foreign graduates, put them to work for 10 years, and pay them with slices of Americans’ citizenship.
The Biden bill would also put several million migrants on a fast track to the voting booths in 2024.
The Politico article also noted that Mark Zuckerberg’s FWD.us advocacy group is conducting polls to persuade Democrats that it is safe to go back into the amnesty waters:
During a session at the House Democratic Caucus’s virtual retreat on Wednesday, advocates shared new polling conducted for the immigrant rights groups FWD.us and America’s Voice, which showed that 63 percent of voters would be “upset” if protections for undocumented immigrants didn’t pass. The online survey of 1,200 voters who participated in the 2020 election was conducted Feb. 20-26.
After the Senate Democrats passed the 2013 “Gang of Eight” amnesty in 2013, they lost five seats in the 2014 Senate elections — and nudged Donald Trump toward a White Hosue run in 2016.
In reality, amnesty and labor migration are deeply unpopular outside the Democrats’ base of white progressives and college graduates.
For years, a wide variety of pollsters have shown deep and broad opposition to labor migration and the inflow of temporary contract workers into jobs sought by young U.S. graduates.
The multiracial, cross-sex, non-racist, class-based, intra-Democratic, and solidarity-themed opposition to labor migration coexists with generally favorable personal feelings toward legal immigrants and toward immigration in theory — despite the media magnification of many skewed polls and articles that still push the 1950s corporate “Nation of Immigrants” claim.
The deep public opposition is built on the widespread recognition that migration moves money from employees to employers, from families to investors, from young to old, from children to their parents, from homebuyers to real estate investors, and from the central states to the coastal states.
Biden’s DHS opens the ‘OPT’ door wider for many foreign college graduates to take starter jobs & careers from new US graduates.
That’s a reversal from Trump, when his deputies quietly tried to help American grads get the jobs. #H1B, #OPThttps://t.co/Y3o9PIgpTj
— Neil Munro (@NeilMunroDC) March 4, 2021