Lauren Boebert: Democrats Seek to Use Language to Control the Narrative, Shape Perception 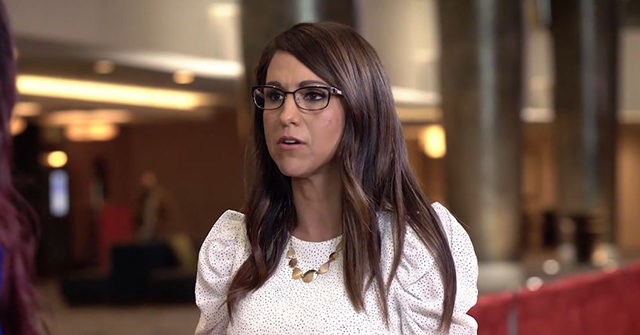 Lauren Boebert: Democrats Seek to Use Language to Control the Narrative, Shape Perception
2
Matthew Perdie, Jack Knudsen
Hannah Bleau
4 Mar 2021
ORLANDO, Florida — Democrats seek to use language to control the narrative and shape perception — something they have done in pushing their radical proposals, from H.R. 1 to the Equality Act — Rep. Lauren Boebert (R-CO) warned during an exclusive interview with Breitbart News on Saturday.
Appearing at CPAC, Boebert spoke about the Democrats’ radical policy proposals — from the Equality Act, which passed in the House last week, to H.R. 1, which passed in the House Wednesday evening. At the root of these proposals is the Democrats’ grander attempt, she said, to use language to control the narrative and shape perception.
“If they control then language, they control the narrative. And if they control the narrative, they control perception, and right now in America, it seems that perception is reality,” she said, stressing that it is up to the Senate to hold the line as the House continues to advance House Speaker Nancy Pelosi’s (D-CA) radical proposals, such as the Equality Act, which she forcefully stood against in a fiery floor speech last week.
“Democrats truly have traded the truth for a lie. The truth is, there are two genders. You can’t just make up how many genders we have. … This Equality Act who is it equal for? Who is it providing equality to? Certainly not women. I’m a woman. I have five nieces, and what about my nieces who now have to look behind their backs to make sure that there isn’t some confused man creeping in the bathroom trying to catch a peek at them?” she asked.
“Is it equal for the parents who are at risk of having their child taken from their custody because they refuse to inject their child with hormone blockers?” she asked, explaining that she is “tired” of Republicans remaining on defense on the issue.
“Is that really what they [Democrats] want? They want our children to mutilate their bodies before they’re even adults and make these harsh life-altering decisions? We need to go on offense about this. There Equality Act is not equal for any American in the United States,” she said.
H.R. 1, which she dubbed the “For the Swamp Act,” is another radical proposal that must be stopped, Boebert insisted.
“We have H.R. 1 and the Democrats, they call this the ‘For the People Act.’ No. It’s the ‘For the Swamp Act.’ This is something that will federalize our elections. It’s a D.C. takeover of our elections,” Boebert explained. “This goes right back to them controlling the language. They act like it’s something that’s great for you. … They act like all of these things are wonderful for the American people, and they’re not.”
“Pretty much, if the title of a bill sounds wonderful, run. Run, it’s terrible,” she explained. “But the ‘For the People Act,’ ‘For the Swamp Act,’ you know, this actually has tax dollars that will pay for politicians’ campaigns. It’s disgusting. No tax dollar should go to a campaign.”
Pelosi and the Democrats, she said, are making “terrible decisions,” and it is “time the American people take a stand and take our country back.”
“We need the Senate to hold the line, and the Senate is America’s hope right now, so we need people all over contacting their senators, calling them. Those phone calls matter. The letters matter. We have logs of who calls in, and it makes a difference when those numbers start to grow on certain topics. So we need people engaged,” she added.
The Colorado congresswoman also criticized the $1.9 trillion coronavirus relief proposal overwhelmingly backed by Democrats, noting that, once again, Democrats are using language to “make Republicans just look like mean, bad people.”
“But we know that there’s still $1 trillion that’s already been passed and approved that’s unspent. Let’s spend that $1 trillion before loading up a brand new bill full of pork,” she said, asking why art institutions are getting “millions of dollars when the Americans people are sitting at home waiting on a $1,400 check.”
“Progressives are incentivizing Americans to vote for Democrats because they think they’re someone going to get some sort of bonus from it. Maybe $2,000 checks,” she said. “Well, no. We’re getting a president who’s bringing us back into endless wars, and just making money out of thin air.”
PoliticsCPACFor the People ActH.R. 1Lauren BoebertOn the Hill
.