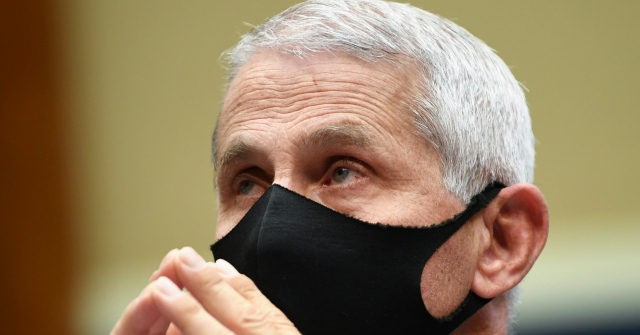 Pam Key
4 Mar 2021
National Institute of Allergy and Infectious Diseases head Dr. Anthony Fauci said Thursday on CNN’s “The Lead” that Gov. Greg Abbott (R-TX) scrapping mask mandates was “ill-advised.”
When asked about Abbott, Fauci said, “We know that what we have right now unfortunately with the cases coming down that we’ve reached a situation over the last week where it seems to have plateaued at a level of 60,000 to 70,000 infections per day. With that amount of circulation at the community level, Jake, it is quite risky to completely remove all of the public health measures and just act like there’s no virus in the community when we know it is at an unacceptably high level. I said that yesterday, and I’ll say it again. I think that’s ill-advised.”
Anchor Jake Tapper said, “Governor Abbott also questioned when would be the right time to re-open businesses at full capacity? When would be the right time to remove masks? What do you think? What would you want to see first before states like Texas end restrictions?
Fauci said, “Well, I wouldn’t want to see a light switch go on and off with regard to restrictions, Jake. I would like to see as we get the level of virus in the community to a very low level. Well, well below the 60,000 to 70,000 new infections and somewhere, and I’ll just pick a number even though there’s not a good model there yet, but I would say less than 10,000 and maybe even considerably less than that. Also, I would like to see a substantial proportion of the population vaccinated. Now that doesn’t mean you won’t be able to pull back on some of the restrictions.”
“You can gradually get people into back again to outdoor dining and indoor dining with certain capacity restrictions, etc.,” he continued. “You don’t want to go from very stringent public health restrictions to just turning it off and say that’s it. Just let everybody do what they want. You particularly don’t want to do that when you have a high level of community spread which is what we have now 60 to 70,000 new infections per day. Those numbers don’t lie. So I want us to all start getting back to some degree of normality, but we want to do that gradually and not all of a sudden, abruptly.”
Follow Pam Key on Twitter @pamkeyNEN
ClipsHealthPoliticsAnthony FaucicoronavirusGreg AbbottJake Tappermasks
.