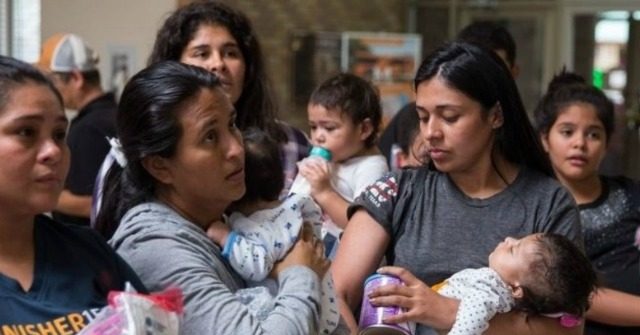 Report: Senate Democrats to ‘Fully Subsidize’ Employer Healthcare Coverage, Including Illegal Immigrants
8 LOREN ELLIOTT/AFP/Getty Images
Sean Moran
3 Mar 2021
Senate Democrats are preparing to fully underwrite COBRA subsidies for laid-off workers in their version of the $1.9 trillion coronavirus relief bill, which would also aid illegal immigrants, according to a report from Politico.
After the House passed the Democrats’ $1.9 trillion coronavirus bill on partisan lines, Senate Democrats are now preparing their version of the mammoth legislation.
Politico reported that Senate Democrats want to increase the COBRA subsidies to help laid-off workers so that they can continue to stay on their employer-provided healthcare plan rather than shop for a plan on the Affordable Care Act (ACA) exchanges.
The House version of the legislation allowed for subsidies to pay for 85 percent of COBRA premiums to laid-off workers, including illegal immigrants.
The Senate Democrat version would reportedly increase the subsidies to 100 percent of premiums, which would cost roughly $15 billion.
Politico wrote that this potential increase in COBRA subsidies resulted from lobbying pressure by unions, employers, and the healthcare industry. The outlet reported:
Early in the coronavirus emergency, an unlikely alliance of unions, employers and the health industry banded together to push Congress to subsidize these plans when it looked like the pandemic-related layoffs might seriously dent the lucrative market.
The effort went to the back-burner as some jobs recovered and the pandemic closures hit restaurants and the retail industry the hardest — sectors that are less likely to offer workplace insurance. Still, it stayed on the priority list for unions and employers.
Republicans in the House offered amendments to stop COBRA subsidies from going to illegal immigrants; however, Democrats blocked their proposals.
Rep. Ross Fulcher (R-ID) said in February, “My amendment would ensure that taxpayer dollars – or tax credits for COBRA coverage in this legislation – would only goes to those with lawful immigration status.”
WATCH:@RepRussFulcher introduces an amendment to prevent illegal immigrants from getting taxpayer-funded healthcare through COBRA subsidies in Democrats’ massive bill. pic.twitter.com/UOQuKCekho
— Mark Bednar (@MarkBednar) February 10, 2021
WATCH: @repkevinhern introduces his amendment to ensure that illegal immigrants would not be eligible for COBRA subsidies in Democrats’ bill. pic.twitter.com/C9kq2w809W
— Mark Bednar (@MarkBednar) February 11, 2021
Sean Moran is a congressional reporter for Breitbart News. Follow him on Twitter @SeanMoran3.
HealthImmigrationPoliticsAffordable Care Act (ACA)CobracoronavirusObamacare
.