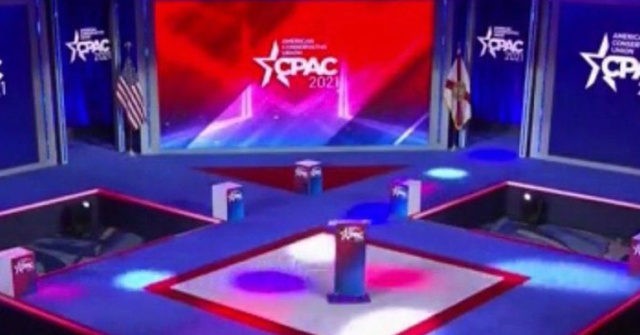 Left-Wing Company with MSNBC, Biden Ties Designed CPAC Stage
28 milano_alyssa/Instagram
Hannah Bleau
3 Mar 2021
Leftists caused a stir last week after spreading a false conspiracy theory that CPAC’s main stage depicted a Nazi symbol, but Design Foundry, the left-wing company that designed it, said it had “no idea that the design resembled any symbol, nor was there any intention to create something that did.”
Design Foundry, which designed CPAC’s stage, has worked with left-wing organizations, such as MSNBC, Google, and the Biden Cancer Initiative, according to National Pulse. The outlet added that “of the $7,766.50 spent by Design Foundry workers on federal elections, just $140 – or 1.8 percent – went to Republican candidates.”
Journalist Yashar Ali also noted that the firm’s owner is “very liberal and was so excited for Biden’s victory”:
2. Also worth noting that many of her employees are liberal
So many of you decided to go after something without any reporting or knowledge about who was responsible for the design
And before you ding her for working for CPAC, you try having an events business during a pandemic
— Yashar Ali 🐘 (@yashar) March 3, 2021
4. And none of you will admit you got it wrong or apologize because in your minds it means you’re caving into Trump.
Now an event company, which is a liberal owned and run small business, is associated with a horrific allegation that is based on conspiracies and no evidence.
— Yashar Ali 🐘 (@yashar) March 3, 2021
The stage design firm told Forward that it “had no idea that the design resembled any symbol, nor was there any intention to create something that did” and added that the design “intended to provide the best use of space, given the constraints of the ballroom and social distancing requirements.”
Further, while the American Conservative Union (ACU) approved the design, the contract stated that the “designs, renderings, drawings, specifications, materials and other documents used or created as part of the proposal are owned by Design Foundry.”
Ian Walters, director of communications for the ACU and CPAC, told the outlet that organizers will not use the design firm for future events.
“ACU and CPAC have no interest in promoting antisemitism from our stage, whether it’s what happens on the stage or the design of the stage itself,” Walters said.
“It’s clear that the company we retained designed a stage that has become an unwelcome distraction. As a result, we will not be using that company’s services going forward at future events,” he added.
The main stage became a point of distraction as the event began after leftists took to Twitter, accusing CPAC of deliberately showcasing a Nazi symbol.
“This is the stage at CPAC. THEY’RE NOT EVEN TRYING TO HIDE IT ANYMORE,” Alyssa Milano wrote in a post to her 2.9 million Instagram followers. “@hyatt, this is what’s happening in your building. @tedcruz, you stood on this stage”:

A post shared by Alyssa Milano (@milano_alyssa)ACU chairman Matt Schlapp quickly dismissed the stage design conspiracies as “outrageous and slanderous”:
Stage design conspiracies are outrageous and slanderous. We have a long standing commitment to the Jewish community. Cancel culture extremists must address antisemitism within their own ranks. CPAC proudly stands with our Jewish allies, including those speaking from this stage.
— Matt Schlapp (@mschlapp) February 27, 2021
The ACU also blasted Hyatt, which hosted the convention, following the conclusion of the event after the hotel released critical statements. The ACU said the statements appeared to validate “demonstrably false and malicious claims.”
PoliticsACUAlyssa MilanoCPACMatt SchlappNaziTed Cruz
.