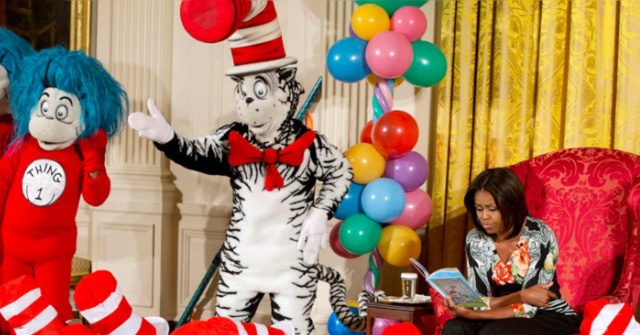 Flashback: Obamas Hosted Special Events at WH — ‘Dr. Seuss Books Still Inspire Children Throughout the World’
3 AP Photo/Jacquelyn Martin
Penny Starr
3 Mar 2021
Former president and first lady Barack and Michelle Obama hosted several events while in the White House that focused on Dr. Seuss and his iconic children’s books, six of which have been pulled from product because of alleged racist content.
“On Read Across America Day, we partner with the National Education Association and mark the birthday of Theodor Geisel, whose beloved Dr. Seuss books still inspire children throughout the world to read,” Obama said in 2009.
The former president was speaking to interns in 2015 when he claimed “pretty much all the stuff you need to know is in Dr. Seuss.”
“We’re all the same, so why would we treat somebody differently just because they don’t have a star on their belly?” Barack Obama asked the group. “If I think about responsibility, I think about Horton sitting on the egg up in the tree while Lazy Mayzie’s flying off, doing whatever she wants. Know what I mean?”
That same year Obama released a presidential proclamation for Read Across America Day, 2015. It said, in part:
The works of Theodor Seuss Geisel, better known to us as Dr. Seuss, have sparked a love for reading in generations of students. His whimsical wordplay and curious characters inspire children to dream big and remind readers of all ages that “a person’s a person no matter how small.”
Fox News reported on another occasion when Barack Obama touted Dr. Seuss’ work:
In 2018, during an interview with author and philanthropist Dave Eggers, Obama repeated the sentiment while comparing his work as a community organizer to his work as president and explaining how “the nature of human dynamics does not change from level to level.”
The former president and first lady also embraced his children’s books on Easter and National Read Across America Day, when schools across the U.S. celebrate reading on Theodor Seuss Geisel’s March 2 birthday to commemorate the popular children’s author.
The former first lady also celebrated the holiday by reading to children during National Read Across America Day events over the eight years the Obamas led the White House and as recently as May 2020.
The organization in charge of Seuss’s legacy announced its decision to ban its own books in a statement released on Tuesday:
Today, on Dr. Seuss’s Birthday, Dr. Seuss Enterprises celebrates reading and also our mission of supporting all children and families with messages of hope, inspiration, inclusion, and friendship.
We are committed to action. To that end, Dr. Seuss Enterprises, working with a panel of experts, including educators, reviewed our catalog of titles and made the decision last year to cease publication and licensing of the following titles: And to Think That I Saw It on Mulberry Street, If I Ran the Zoo, McElligot’s Pool, On Beyond Zebra!, Scrambled Eggs Super!, and The Cat’s Quizzer.
These books portray people in ways that are hurtful and wrong.
“Dr. Seuss Enterprises listened and took feedback from our audiences including teachers, academics and specialists in the field as part of our review process,” the organization said in an interview with the Associated Press. “We then worked with a panel of experts, including educators, to review our catalog of titles.”
Follow Penny Starr on Twitter or send news tips to pstarr@breitbart.com
PoliticsSocial JusticeBarack ObamaDr. SeussMichelle ObamaNational Education Associationpresidential proclamationracismRead Across AmericaWhite House
.