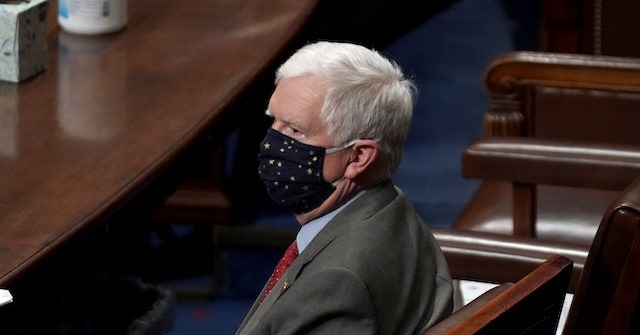 Exclusive – Rep. Mo Brooks: H.R.1 Is Really the ‘Socialist Democrat Election Fraud Enhancement Act’
1,664 Greg Nash/AFP via Getty Images
Hannah Bleau
3 Mar 2021
Rep. Mo Brooks (R-AL) blasted H.R.1, which the U.S. House of Representatives is considering on Wednesday, as the “Socialist Democrat Election Fraud Enhancement Act,” explaining the measure will do “great damage” to the security of America’s election system nationwide.
In an exclusive interview with Breitbart News on Tuesday, Brooks highlighted the dangers of H.R.1, which is more commonly known as the “For the People Act.”
“I call it the ‘Socialist Democrat Election Fraud Enhancement Act. It will do great damage to the reliability and security of America’s election system,” he said, listing off some of the specific changes the measure would make.
“The socialists seek to mandate no-fault absentee ballots, which are the tool of choice for vote thieves. They seek to eliminate the photo identification requirement and, by the way, when the federal government does it, that eliminates all state laws to the contrary,” Brooks said, explaining that it would repeal “who knows how many state statutes that protect the security of our election system.”
Overall, the act largely federalizes elections, taking the vast majority of power away from the states.
“It, to a very large degree, federalizes and micromanages the election process administered by the states. It implemented, as I mentioned, some of the worst changes in election rules that occurred during the 2020 election. It requires states to restore the ability of felons to vote the moment they’re out of prison, regardless of uncompleted parole, probation, or restitution requirements or what states may believe is the appropriate restoration of voting rights for convicted felons,” he continued.
It is essential, Brooks told Breitbart News, for Republicans to stop the “socialist Democrats” from placing in federal law the “very systemic flaws” that occurred during the highly contentious 2020 presidential election.
Others, Brooks said, would be “wise” to copy Alabama, which received an “A” rating from the group Concerned Women for America’s election integrity scoreboard for its rules for its requirements for voter identification, handling of mail-in voting, and more.
The congressman said the Alabama state legislature has enacted “good laws” on absentee ballots, requiring voters to provide proof of absenteeism, as well as requirements for photo identification, which Brooks said is “probably the number one way to minimize voter fraud.”
The Alabama legislature, he added, has done a “very good job” on election integrity measures, overall.
“That’s why we’re ranked number one in election security, and we are a model that other states and the federal government would be wise to copy,” Brooks said.
Hans von Spakovsky, manager of the Heritage Foundation’s Election Law Reform Initiative, has described the measure as an “800-page monstrosity” that would ultimately result in the “federal takeover of the running of elections.”
“If you’re a state like Alabama or Texas that has a voter ID law, you might as well forget it, because this federal law would override all state voter ID laws so they’re now unenforceable,” he said during a January appearance on SiriusXM’s Breitbart News Daily.
According to Politico, the first votes for H.R.1 are expected to begin between noon at 1:30 Eastern.
Breitbart News reported yesterday that a Texas judge and three other people were indicted by a grand jury on 150 counts related to voter fraud during the 2018 Medina County Primary Election.
Politicsabsentee ballotselection integrityFor the People ActH.R. 1Hans von SpakovskyMo BrooksOn the Hillvoter fraudVoter ID
.