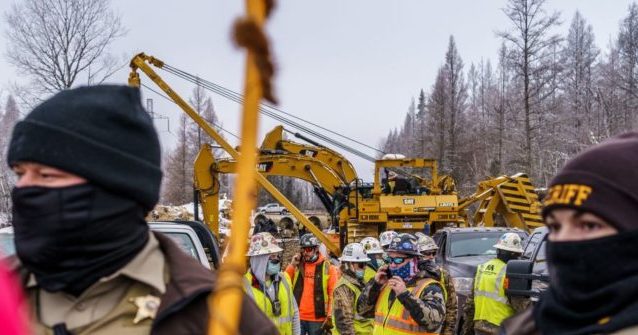 Arkansas AG Leslie Rutledge: Joe Biden Keystone Pipeline Decision ‘Cancelling Jobs’
6 KEREM YUCEL/AFP via Getty Images
Kyle Olson
3 Mar 2021
Arkansas Attorney General Leslie Rutledge (R) told The Kyle Olson Show this week a group of attorneys general may take legal action against President Joe Biden’s executive order canceling the Keystone XL pipeline.
“President Biden’s decision to cancel the Keystone pipeline is canceling jobs, it’s canceling energy independence, it’s canceling money in Americans’ pocketbooks,” Rutledge said.
Rutledge said she spoke with Arkansans who were working on or were going to work on the pipeline.
“We had the Keystone pipeline being produced right here in central Arkansas,” she said. The pipe now lays dormant on the ground “and [is] not being put into place.”
Rutledge joined Montana Attorney General Austin Knudsen (R) and 12 other attorneys general in signing a letter to Biden, which read in part:
As the chief legal officers of our states, we write with alarm regarding your unilateral and rushed decision to revoke the 2019 Presidential Permit for the Keystone XL pipeline. Your decision will result in devastating damage to many of our states and local communities. Even those states outside the path of the Keystone XL pipeline—indeed all Americans—will suffer serious, detrimental consequences. …
We cannot “Build Back Better” by reflexively tearing down. America needs every tool in her possession to emerge from the COVID-19 crisis stronger and more secure. You have expressed a commitment to unite the Nation. If that is to be more than empty rhetoric, you must fully consider and account for the alarming effects your actions have on states, local communities, families, and workers.
Please be aware that the states are reviewing available legal options to protect our residents and sovereign interests. In the meantime, we urge you to reconsider your decision to impose crippling economic injuries on states, communities, families, and workers across the country.
Rutledge criticized John Kerry, Biden’s “Special Presidential Envoy for Climate.”
“This is nothing more than telling Americans this Green New Deal is going to give them jobs on a hope and a prayer. We don’t need a hope and a prayer, we need the actual jobs,” she said.
The country needs the energy independence the pipeline would ensure, Rutledge added.
Kyle Olson is a reporter for Breitbart News. He is also host of “The Kyle Olson Show,” syndicated on Michigan radio stations on Saturdays–download full podcast episodes. Follow him on Parler.
EnvironmentNational SecurityPoliticsArkansasJoe BidenKeystone XL PipelineLeslie Rutledge
.